A while back I bought an old, big tractor. I already had a small landscape tractor, but I wanted to be able to dig in this rocky soil and the little one just wouldn't cut it <link>. This big guy had been poorly maintained for many years out here in the Arizona sun and has been a constant pleasure for me to mess with.

But, wait, how can a poorly maintained tractor be a pleasure? In case you haven't noticed, I like to fix things; especially things that I know little or nothing about. I get to dive in, take it apart, figure out how it works, and eventually, actually use it for whatever purpose it was intended. This tractor has been a great project machine for the last couple of years and has been running (well mostly) the entire time. It's dug holes for me, the neighbors and a friend down the road; it also moves dirt for folk that managed to get a pile of it delivered to start a garden. Fun machine.

The valves for the front loader have been leaking the entire time, but hydraulic fluid is much less expensive than the $1800 valve assembly, so I just lived with the leak until about two weeks ago. I had several choices, replace the valve, fix the valve or install a different valve. Each choice, naturally, had its own shortcomings:

If I replace it, I'd have to shell out $1800 plus shipping for a new one. There are a few used ones that show up from time to time on ebay, but who knows their history? I'd have a new valve and it wouldn't leak.

I could send it to a hydraulics shop. I called a couple of hydraulic shops and the estimates ran from $700 to $1000 with the caveat that they might have to custom machine some parts that weren't available. That, of course would drive the price up. The up side is that it wouldn't leak.

Replacing it with a different kind of valve would require some modifications to the tractor and special fittings would have to be put in place. This was the cheapest solution in raw money, but would take some plumbing and fabrication time.

I decided to pull the valve loose from the tractor and see how bad it would be working on it. The hydraulics were weird compared to other tractors of the same era and the valve assembly was a lot larger than I initially thought. I just put it back on the tractor thinking I would decide later (after a couple of quarts of hydraulic fluid) which route I would pursue.

But (there's that word again), after putting it back, the front bucket wouldn't hold position. I noticed it throwing away a pile of weeds. I put the bucket about a foot off the ground in the up position and went to get a wagon load of weeds. When I got back, the bucket had rotated down.

After rotating the bucket up again, I put the weeds in the bucket and went to get another wagon full; when I got back, the weeds were on the ground and the bucket was down again. Taking it for a test drive, I found out that I had to rotate it back up every few minutes or it would wind up facing the ground. The arms worked fine, it was just the bucket that was trouble.

My trouble shooting skills kicked in and told me that messing with the valve put it over the edge and it was time to make one of the decisions above, so I decided to rebuild it myself instead of taking it to a hydraulics shop. Yep, that was choice number four that I hadn't thought of before.

Out came the big tools and cheater bar, and about an hour later I had the valve free from the tractor. The idea was to pull it apart, replace the various o-rings and put it back. So much for plans.

Here's a top view of the valve assembly: 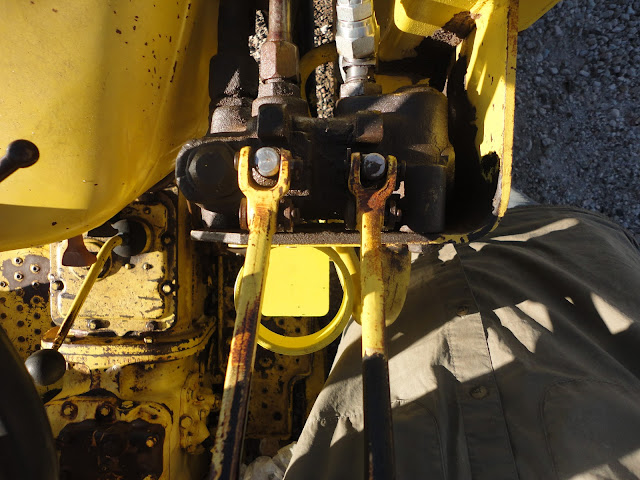 The two handles are for the loader lift and the bucket tilt. From the back side, it looks like this: 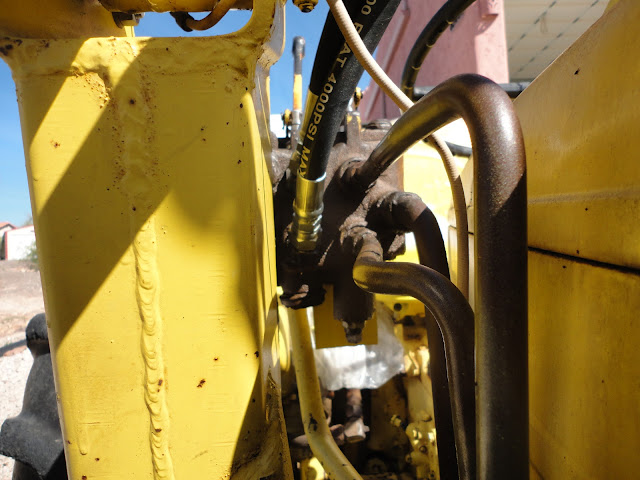 People familiar with tractors might notice a couple of things. There are the usual 'work' ports, two each for the loader up down and bucket rotation cylinders and an input port for the fluid. What isn't there is the output port to return the fluid back to the system. That can be explained by this picture of the mounting plate after the valve was removed: 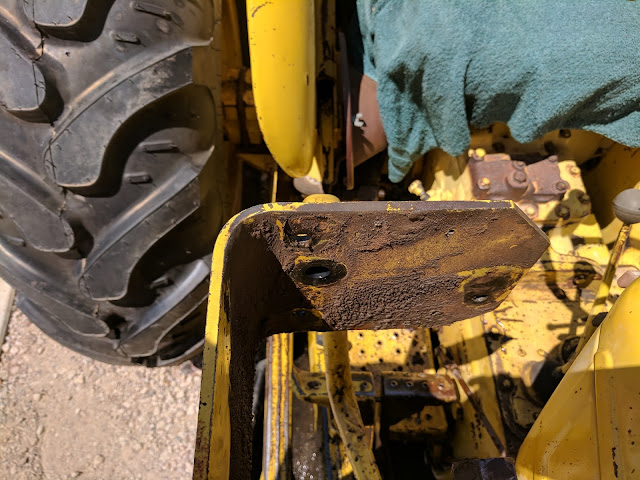 See the hole in the middle of the picture? It's the relatively clean black spot. That's the return line; they actually fed the fluid through the mounting plate to a pipe that leads to the frame of the loader where the reservoir is. This has the advantage that it will not rot in the sun and the disadvantage of making the valve almost impossible to replace with something else. Probably wanted to ensure the sale of parts later.

Here's the valve after I got it out: 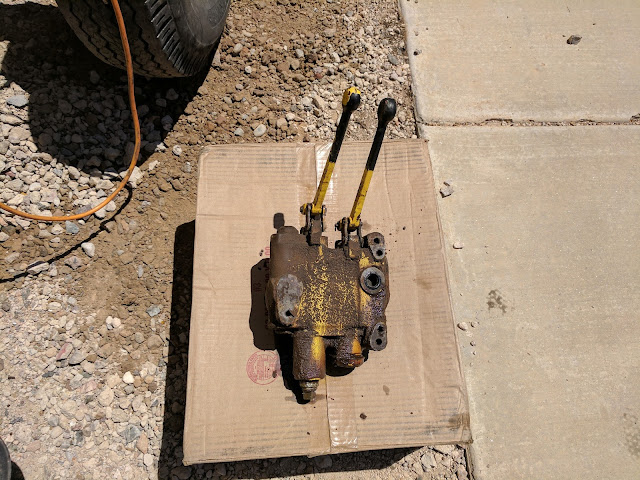 I carried it inside the garage and started taking it apart. But before I show you the guts of the thing, I want you to notice the fitting on the very lowest part of the valve body in the picture. Doesn't that look like a galvanized pipe fitting? It was. Here's another view of it while it was still on the tractor: 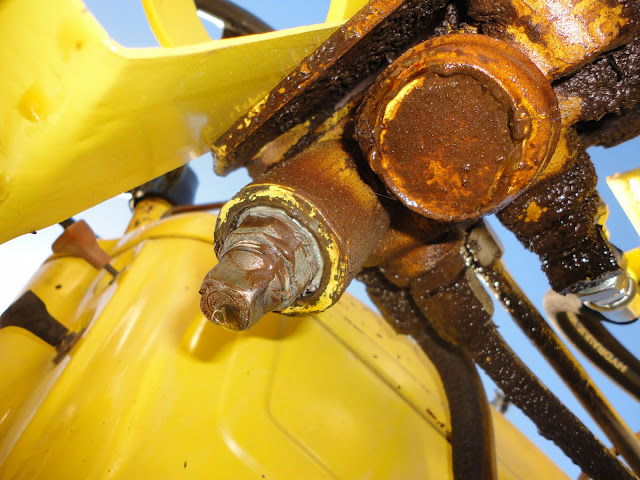 I knew this wasn't supposed to be there, but didn't really understand what the problems might be. Notice the wet fittings from the leak; I have to keep in mind what the actual problem was I was trying to fix. 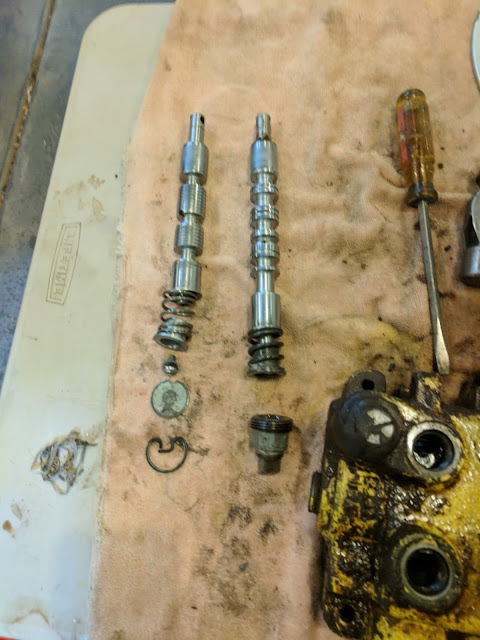 These are the two 'spools' that are the actual moving parts inside the valve body. The cylindrical cuts in them allow hydraulic fluid to move to the inputs on the cylinders depending on where you have the control levers positioned. The galvanized fitting is right there at the bottom of the spool on the right. I hunted down a parts diagram of the valve assembly to see what was supposed to be there:

I wrapped a red rectangle around parts that were missing. What happened was that the end cap (20 on the drawing above) was taken off and probably lost. The other parts (17-19) probably went with it, so they sealed that part of the valve body with a kludge of galvanized pipe fittings. Naturally, pipe threads didn't match the threads of the valve it was a little bit too small, so someone wrapped the fitting with about three yards of teflon tape and screwed it in that way.

This was the cause of the bucket rotating down on its own. When I took the valve off the first time I probably bumped the fitting and it moved enough to cause a small fluid flow, just enough to cause the bucket to move slowly. When I messed with it the second time the already deteriorating teflon tape turned into slime and just came apart. Its that pile of stringy looking stuff in the spool picture above. Here's a closer look: 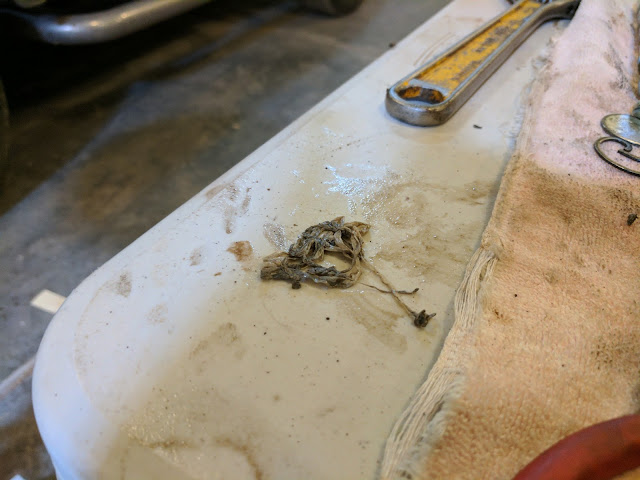 I also found my leak: 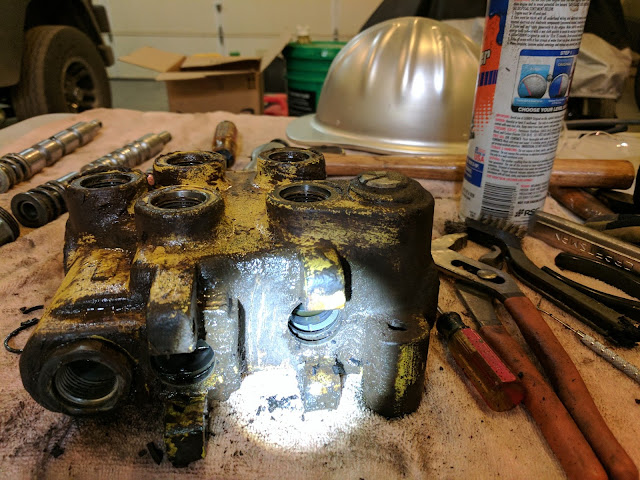 I used a flashlight to give you a better view. That hole in there is where the seal for the top of the valve should be. That little pile of black debris down below it is what was left of the seal. All the top seals were that way, brittle powder. It's actually a wonder that the leak wasn't much worse.

So, there I was. The valve had over 200 bucks worth of missing parts and a bunch of cheap seals and o-rings that needed to be replaced. Roughly a couple of weeks wait for delivery and a few hours of work.

Naturally, I decided to take a totally different approach. I ordered one of these: 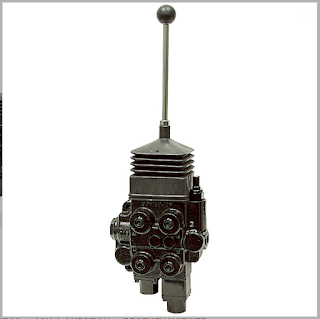 This is a 24 gallon per minute, double spool valve assembly. Brand new, latest technology and a JOY STICK ! For some work in re-plumbing and mounting this, I'll have the latest in loader control. Yes, it'll cost me about $100 more to do it, but this is just another project to have fun with.

Now, I'm pacing the floor waiting for it to arrive.

Edit: I got it in and installed it, then forgot to follow up on the blog. Here's the finish of this project <link>.
Posted by dave at 6:33 PM