I FINALLY Got My 3D Printer

Many, many moons ago I decided that I couldn't afford a 3D printer since I don't want to make 3D printing a hobby, I just want to design and print things to use in my other hobbies.

Things like a coffee cup holder for the little tractor, enclosures of one kind or another for the various little computers around the house, custom light switch plate that has a USB plug in it for one of those double outlets, an outside enclosure that will hold an XBee; you get the idea. I've spent hours scanning the web for ideas about enclosures and there just aren't many choices, and the choices there are, frankly, suck.

I don't plan on being the worlds greatest enclosure designer, but it would be great to hide the wires and switches inside something.

But, since it would be a tool, not the focus, I couldn't see spending over a $1000 for a reasonably good printer that I wouldn't have to babysit and nudge all the time. Since I wouldn't spend the money, I decided to use credit card points to buy the printer. It took years to get enough to buy the printer ! Those points don't add up very fast.

Once I got the points, I was up to my neck in various projects around the house that were causing me to spin in circles accomplishing nothing, so I decided to force myself to finish certain projects before I was allowed to order the printer. The well repair got in the way, I also got some very heavy duty shelves for the garage, some serious repair work on the pool filter, and a big storage box for my toy hauler, but I finally finished them. A couple of days ago, the printer arrived. 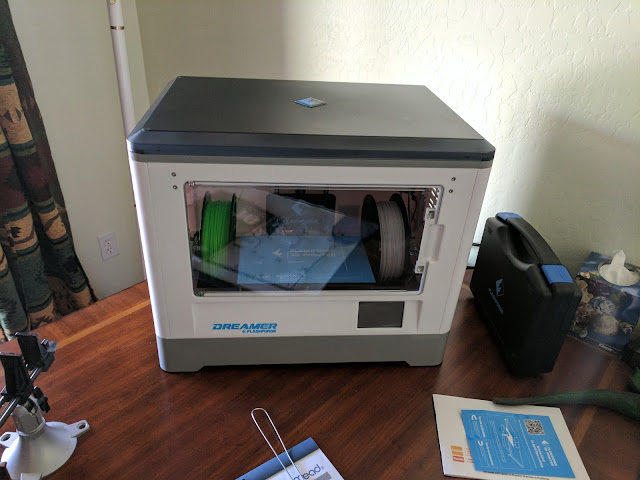 I got the Flashforge Dreamer basically because of the reviews. There are certainly better ones and cheaper ones, but at some point, you have to make a decision, and good or bad, this was the choice I made. Needless to say, when the printer arrived I unboxed it right away and hunted down the test print. 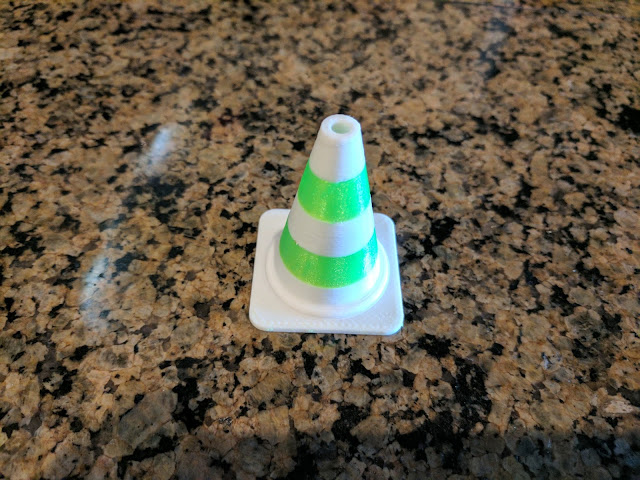 I did that! Sure, it was composed by someone else, and all I did was print a file, but after literally years of postponed expectations, I finally did it. Dual extruders and different colors of filament and totally enclosed, oh my. (misquoting Judy Garland in the Wizard of Oz a bit).

There's company visiting, so I don't get to spend much time messing with it, but I did create my first little box. 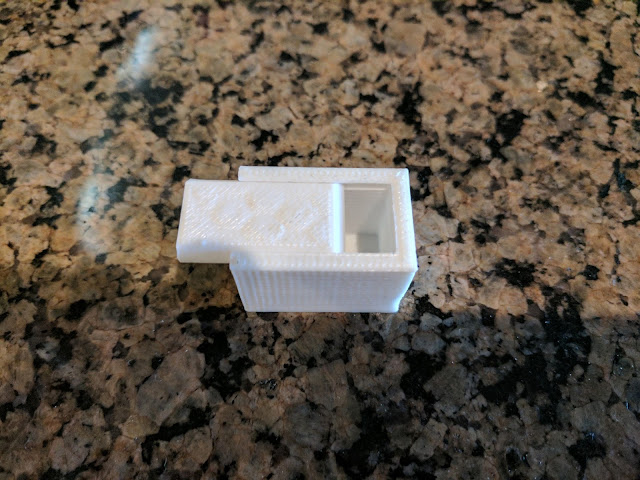 It's about the size of a quarter; too small to actually use for anything, but I drew it and printed it. No, darn it, it wasn't easy. I started off with FreeCAD and got totally lost in the intricacies and nit-picking of design rules. What the heck is a closed polygon anyway?

OpenSCAD is very compelling because you basically program the print. I could probably do that, but I really wanted to be able to just click on an object on the screen and move, stretch, or spin it until it looked like something I wanted to print. Lots of modelling software is geared towards creating characters for games. I'm not at all interested in the skin texture of some scantily dressed teenagers dream girl for a video game. Plus, that software is really, really complex. I want to print things, not spend weeks designing a facial scar for the burly hero of the latest version of Doom. On second thought, maybe the dream girl could be a project later.

In simple desperation I started using Tinkercad on the web. I'm not happy with it being a cloud based tool, but it will do for now. As I gain experience, I'll probably change to something else, but at least it was simple enough to get me started.

The box and lid above was done with Tinkercad. I got the box on the first try, and I based it on a box a friend of mine made me a couple of years ago. The lid, well that was another story: 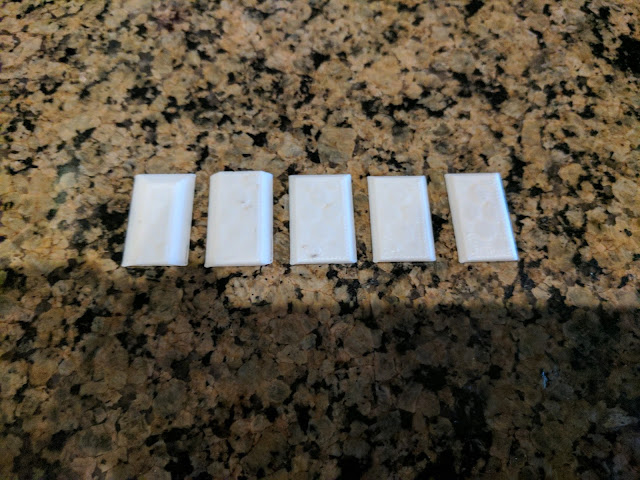 The first one was too long, and I forgot a bevel. The second one was too long. the third wouldn't slide in at all, to big. etc. It took five tries to get it good enough. Now do you see why I started with a tiny box? I didn't use much filament (more is on order already) and I learned a heck of a lot. Plus, it didn't take five hours to print the thing. It's really disappointing to spend that much time and find out you missed the screw hole by 5mm.

The slide on lid is sort of the idea I want to use for my temperature sensors. Mount everything on the lid, screw the lid to the wall, and slide the box over it. Simple to mount, simple to open, and mounted to something so I don't keep knocking it off the bedside table. What else could I possibly want?

Since I've got relatives staying with me right now, I can't devote hundreds of hours to working out the details, but I can sneak in a little time now and then to play with it. It's funny they don't complain about the smell of melted ABS at all.

This area has an excessive heat warning for the next week. The local weather predicts temperatures as high as 120F (that's 48C to most of the world), so I guess I'll be inside for the afternoons.