My Well, A Parody of Problems Part 5 (Discussion)

Part 1 of this project is here <link>.

A reader asked that I put up a diagram of typical well plumbing and describe how it works. The problem is that there are a lot of ways to plumb a well, so I'll describe how my well used to be plumbed and what I changed it into. You can better understand what went on, and maybe, apply it to some problem you may be involved with in the future.

Let's start off with a picture of what the plumbing used to look like: 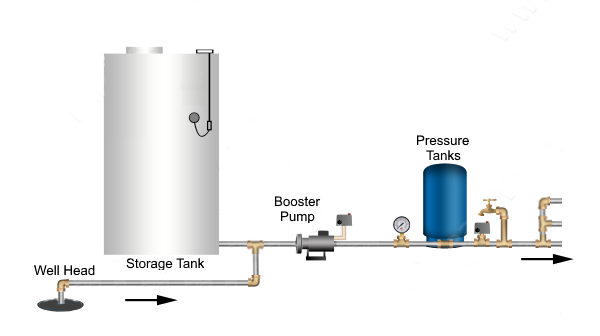 Not shown is a pump at the bottom of the well a few hundred feet down that raises the water up to ground level. The water came in from the left and hit a tee fitting that would send water to both the well and a booster pump. The booster pump had a pressure switch attached to the output to control the maximum and minimum pressure. Next was a pressure gauge so you can control and monitor the water line pressure followed by three pressure tanks to help maintain the pressure and cut down on the booster pump cycling. Then another pressure switch, hose bib and the manifold that led out to the three houses.

Obviously, this will work since we had been using it for years. However, there are some problems. First, since the well head feeds the tank and the pump, the pump will suck water from both the well and the tank when it is on. If there's any air in there, the air will cause cavitation and give lower pressure. It could, over time, destroy the pump because there isn't enough cooling and the pump will overheat. Additionally, any sand that comes up from the well has a good chance of being picked up by the pump and sent to the houses causing problems.

Second there are two pressure switches. Each one is trying to control the pressure on the lines to the house and you have to switch back and forth between them to get the pressure set right. Since they'll age at different rates and one of them might be shaded while the other is in the sun, you can never rely on the pressure being right. These things have a spring inside to control them and heat will change the tension. In the Arizona sun, this is a problem.

So, I changed it to this: 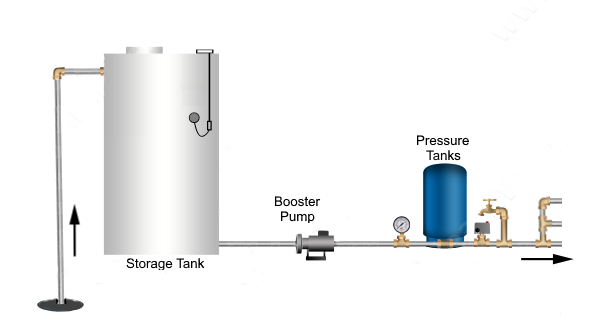 Now the well feeds into the top of the storage tank so the water has a chance to settle out whatever debris happens to get through. The booster pump can only pump from the bottom of the storage tank which prevents any air from getting into the system. There is only one pressure switch to eliminate one failure point and make it much easier to adjust. This is a configuration that is used a lot in my area. There is another configuration that is used here, but most people change it over time to the way above. The other configuration looks like this: 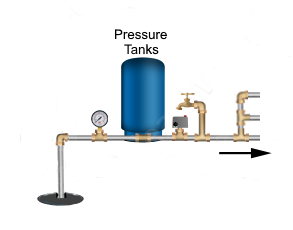 No storage tank, no booster pump and less parts to fail. Of course the disadvantage is that everything relies on the well bottom pump. The heavy cycling of the pump causes it to fail more often and those things are expensive. But, this configuration will save several thousand dollars initially and the other stuff can be added when money isn't as tight.

I hope this answers any questions the last well post may have left.

The other notable (at least to me) thing is that the well was inspected twice in the last few months. One inspection passed it with flying colors and the second one found the bad pressure tank. I don't attribute the inspection with finding the coliform infection, that was a lab in town that a water sample was sent to. Neither inspection looked at the wiring; they looked at the conduit, and ran the well, but they didn't actually check anything to see if there was a problem brewing. Sure, they have disclosures that say they don't open things to look inside, but would you buy a refrigerator without opening the door? It runs, and doesn't make any weird noises, so it must be good ... right?

Never trust those inspections, go look for yourself. Read a little, look up common problems on the web, decide for yourself. Sure, you may find something wrong, but at least it could be a bargaining point.

I still haven't disinfected the well, but everything is all set up for it. I'm trying right now to coordinate a date for that since it will mean turning off the well bottom pump overnight. One of the folk is pretty ill and the other family has little kids. Tough to coordinate.

I'll describe that part of this project in the next well post.