My Well, A Parody of Problems Part 6 (Disinfecting)

Remember back in part 1 <link> I mentioned that the inspection found a bad pressure tank and coliform in the well? I've fixed the pressure tank (and a whole lot of other unexpected stuff), so now it was time to get rid of the bacteria. I wasn't in a big rush to get to this because there were no bad bacteria found, just the usual that wind up in water from time to time. Plus, we all have filters, reverse osmosis devices and water softeners in our houses. There was no real danger and not even any noticeable inconveniences. It did need to be fixed to prevent too large an infection that would clog up the filters too fast, but we weren't close to that point.

One of the things that you need to be sure of is to get chlorinated water into all the pipes that feed the house before the various filters and such. Also, the well itself needed a really high dose of chlorine to kill anything hiding inside. You don't want a high dose of chlorine in the houses, because we didn't want to move while this was happening, so I split the system into two parts.

One part was the well itself and the pipes coming up from the ground to the tank as well as the well casing going back down underground. The other part was the holding tank, pressure tank, surface pump and all the piping to the houses. My thinking was that I'd chlorinate the holding tank at a level roughly equal to what the cities use and let normal usage circulate the chlorinated water to the houses. Of course, I told the neighbors to run water through their pipes to get the chlorine up to their houses. This was mostly to lower the tank with chlorinated water so I could fill it to the brim  before I disconnected the well from the tank.

Then I would pour chlorine into the well and hook the plumbing back to the well vent so I could circulate the water to distribute the chlorine and (hopefully) splash around on the well casing itself. Our well casings are PVC, with a steel pipe around the top thirty feet to protect the PVC pipe. This is very common out here; actually I don't know of any well that isn't constructed this way. Having a PVC casing is great because I don't have to worry about rusting a steel casing by pouring chlorine down the well where I can't effectively rinse it off. The plumbing would effectively look like this: 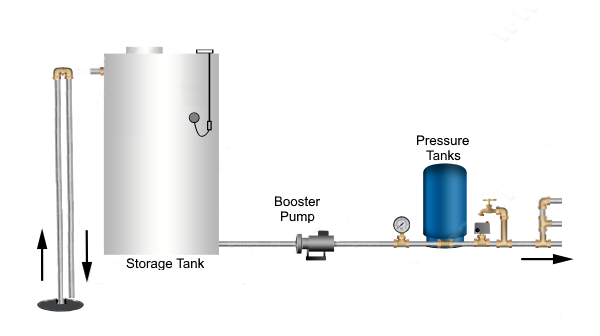 During the process, the holding tank would be all the water we have and the well could be stirred up any time by just starting the bottom pump. There would be a high level of chlorine in the well and a lower level in the tank. Of course, the way I actually did it was a little different.

I mixed a couple of cups of chlorine into the holding tank and told the neighbors to run their water for a little while to get it up to their house. First I topped off the holding tank, then I mixed about a half gallon of swimming pool chlorine with five gallons of water and poured it through a funnel down into the well. You really should water down the raw chlorine. That heavy concentration right out of the jug can mess stuff up. I wanted to check the chlorine level of the well as well as stir up the water down there, so I made a couple of adapters for a water hose: 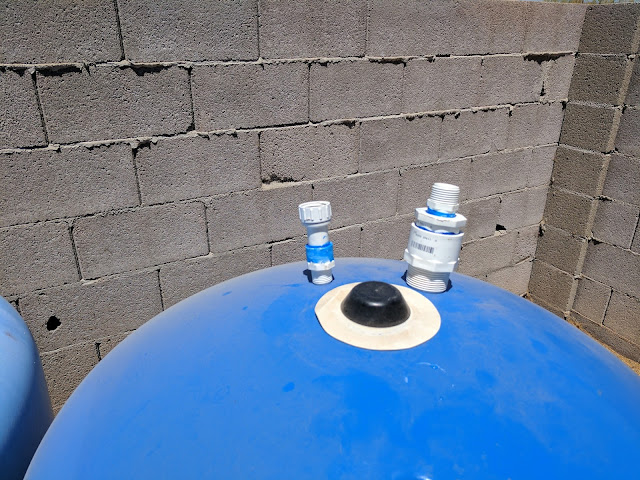 Yes, I got a little wild with the glue, but it was early, OK. The skinny one went on the (new) well vent: 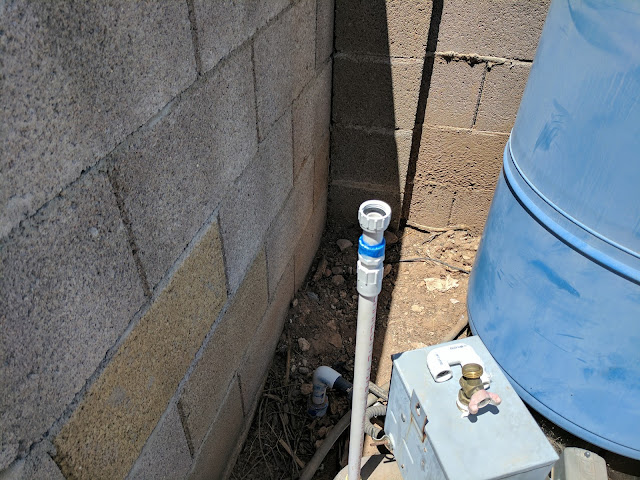 And the other one went on the very end of the pipe that fills the holding tank: 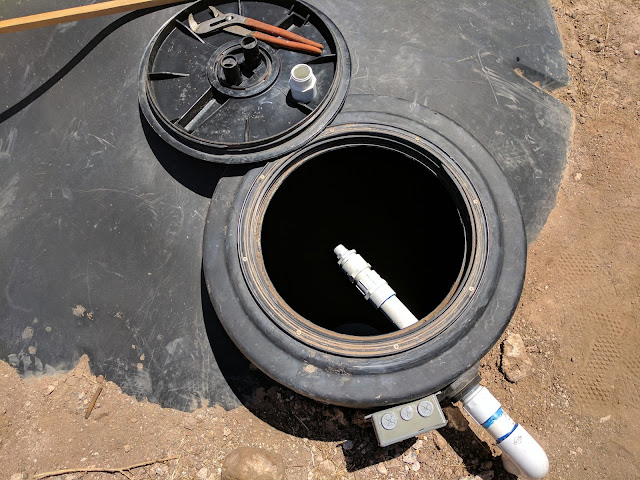 This way I could connect from the output back to the vent and get the chlorine through all the well piping. So, I connected a hose between them: 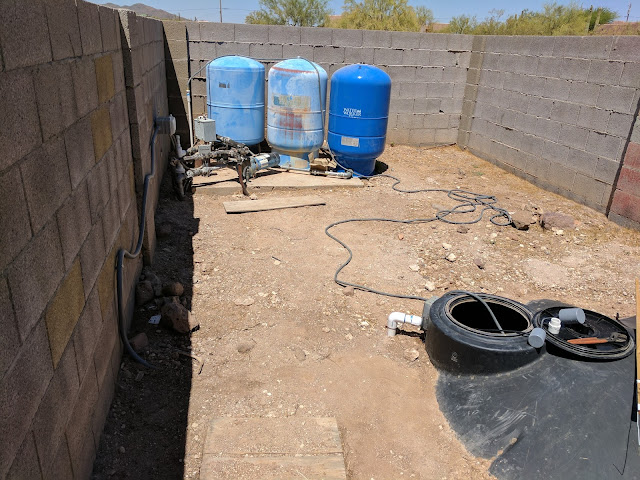 Since the holding tank was disconnected from water, the neighbors agreed to hold off on laundry, turn off automatic watering, bypass the water softeners and close the automatic fill valves on the pools. The automatic stuff should not be running during this process because we has a finite amount of water to work with. Some of those water softeners can use 700 gallons of water recharging, and a load of laundry takes a ton of water. I think they over did it a bit though because we only seemed to use about 700 gallons for all the houses and one of them have two little boys still in diapers.

Around 7:30 pm after soaking for twelve hours, I ran the well bottom pump for another 20 minutes. This was partly for fun and partly to stir it up again. Meanwhile, folk were using the water from the tank and the level was slowly dropping. It looked like the tank would be plenty of water for the houses, but I checked again around 10:00 PM to put my mind at rest. There was plenty of water in the tank.

Bright and early on the second day, I disconnected the hose from the vent side and drug it away from the well to a patch of dry ground. I turned the bottom pump back on and started flushing the chlorine out of the well. This is always scary because some wells actually go dry during this process. If you pump more water out than the well can supply, you have to shut things down, wait for the well level to rise and then continue.

That didn't happen, there was plenty of water in there to flush the chlorine level down to something reasonable. What I did was flush the well until it had the same chlorine level as the tank and then put everything back to normal. By leaving a level of chlorine that was roughly equal to city water, I could extend the time the chlorine was in the system to kill off anything hiding in a pipe connection somewhere. The chlorine would all be flushed in a few days with the only problem being that our pool chlorine level might get a little higher.

There's some things that can happen when you disinfect a well that usually aren't mentioned:

The chlorine will kill the bacteria in the pipes and well which leaves their little dead bodies in the water. If the infection is bad enough, this will clog the various filters you have around the house. The primary filter on a reverse osmosis filter may plug, the filter some refrigerators have may die, things like that. If you find you have very low water pressure somewhere, check the filter; you may have plugged it up.

Also, if you have a lot of scale in the pipe, hitting it with chlorine may cause it to release from the pipe. That plugs filters also. It can also expose the raw pipe, and if you have lead pipes, lead will dissolve into the water. This is Arizona, not Michigan, our pipes are copper, PVC or PEX, no lead to worry about. This is what happened in Flint, they got an e-coli growth and over chlorinated to clear the infection. That dissolved the scale and exposed the lead in their water pipes. A reaction between the chlorine and the lead pipes dissolved the lead into the drinking water and a major water crises developed.

They had lead pipes because it was the law. Yes, there was a regulation that the pipes from the city supply to the house had to be made from lead. And also, yes, they are replacing all of them now. Stupid rules.

Both of these mean discolored water may happen as well as a chlorine smell that well users aren't used to. It isn't a bad thing if you know it might happen, but it can be a bit annoying. We didn't have any of that happen, things went really well.

Thus, the debacle of the well is over, done, fini. I still want to make some other improvements to the system though. I want a 'too full' indicator that will tell me when the tank get too much water in it and shut off the bottom pump. This can happen if the float fails. I also want an alarm to tell me when the tank is too empty and shuts off the surface pump. This can also happen if the float fails.

It would also be really cool to monitor the pumps for when they run, and develop a feel for what should be happening. That way I might be able to develop some heuristics for predicting problems. I also would like to know the level of the well so I can get a feel for the actual water usage of the three houses. Sounds like I need a waterproof ultrasonic distance sensor for the tank and a power monitor for the incoming power. It won't take long to recognize the power usage of the two pumps, and I'll be able to keep track of the tank level so (maybe) I can predict a float failure.

No, I won't monitor the individual lines to the houses. We're in this together, and I refuse to gather any data on other family's usage. Aggregate data is OK though.

But, for now, I don't even want to see that well.