I just got my power bill for November, 2011.  I had a peak demand number of 4.9....crap !  I sort of knew this was going to happen because one day I saw the hot water heater going during the peak period.  This shouldn't have happened, but:

I use an X10 appliance controller hooked to a contactor to control power to the heating element of my solar water heater.  See, when it's cloudy, the solar collector can't generate enough hot water for the house and there's a helper coil in the heater to take over when that happens.  Usually, I keep the power off to the helper coil using an X10 timer that shuts off the power to it during peak periods.  X10 is notably unreliable and failed to turn the power off that day.  Of course, I didn't know it and crawled in the tub to soak some sore back muscles.  The water I used caused the heater to come on and my demand went up during a peak period.

If it hadn't been overcast and cold, or the X10 timer had worked, or I had manually shut it off before using the water, or I had an alarm that told me the usage was that high, I wouldn't have had this problem.  This probably means a new device for the house.  The obvious solution (from my perspective) is to put another timer in like the one I use for the Acid Pump.  Just set this one to keep the helper element off during peak periods and let it run as it wants during off-peak.  I can get the time from my XBee network and I would be able to include the status of the hot water heater on the House Controller.

But, it's the holiday season and time is at a premium so it'll have to wait until January.

So, how much did this little event cost me?  Looking at my bill there were the following charges related to peak usage:  Demand Charge on Peak - Generation $34.86 and Demand Charge on Peak - Delivery $10.24 for a total of $45.10.  My usual Demand level is less than 2 kW averaging around 1.7 so my expected amount would be about 2/5 the billed amount for around $18.00.  The actual power it used is trivial since it was only 4 kWh at $0.19 per kWh or around 80 cents and I would have used power later anyway. So, a soak in a hot bath tub to loosen some back muscles cost me $27.00 extra last month.

And, that's how they get us folks.  One time, one mistake, and your entire month's bill is screwed up.  Next month, you swear to be more careful and watch it more closely and something different happens; you're screwed again. In my opinion, the only way to overcome this is automation to control what happens in the house during the peak periods.  I just didn't realize how reliable it absolutely has to be to declare success.  So, in January, I'll be back to working on controls.  This time I'll disable the water heater element based on peak, and not rely on a stupid X10 controller.

The new fittings and pump head are also working fine.  I'll have to give them some time to see if they start having problems and the temperatures are low so the chemical reactions are retarded and the problem might not come up until summer.  In the meantime, I have gotten some check valves and adapters to try out.  I went to  US Plastics and browsed through their site and found something that may be good as a replacement, but haven't tried them yet.  The new check valves have a metal spring in them; that could be a nasty problem to overcome.  Almost all metals react with HCL, and some of them do it really fast.  I have one of them already in place as the injection valve into the two inch pipe plumbing the pool.  In this case, the spring is exposed to the pool water most of the time with only limited exposure to the acid.  In this instance, it works fine, but the outlook is not as optimistic for something that is exposed to straight acid 24 x 7.  Here's a picture of the candidate replacement parts: 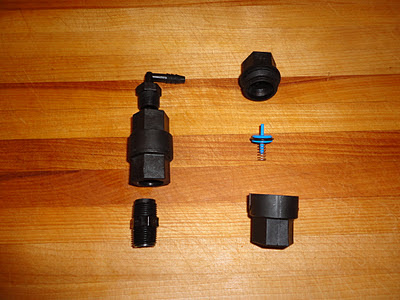 Notice that everything is plastic except the spring, I wonder if I can find Kynar or Teflon springs somewhere.
Posted by dave at 11:42 AM No comments:

I've been having trouble with one of my Ardweeny devices.  I use one of the little guys in a timer that runs my Acid Pump. It has been running well, but recently started to hang up daily.  I added a watchdog timer based on the code I developed for the Arduino Mega2560 that should have caused it to recover if this happened, but that didn't solve the problem.  I finally realized that I may be suffering from a problem with temperature.  It gets cold at night now and the device may be temperature sensitive.  However, before I thought of that, I decided to use the normal watchdog timer code that is supported for the Arduino; it didn't work.

It appears the Ardweeny uses the standard bootloader for the Arduino Duemilanove which doesn't support the watchdog timer properly.  Easy, just replace the bootloader with the one developed by Lady Ada right?  Except, I couldn't find the hex file for it.  I spent a couple of hours looking around the web for it and just couldn't find the darn thing.  I know it's out there, people say they use it and have burned it into their roms, but I couldn't locate it.  Finally, I just gave up and got the optiboot loader for the Arduino Uno and loaded it on.

People talk about how the first of optiboot loaders had a number of problems and they have since been fixed, but I'm here to testify that it's pretty darn hard to find one that has the various problems fixed that you can load on a board.  After trying several of them I finally found one that actually works.  Version 4.4 of the optiboot loader will burn into an Ardweeny and works just fine.  It supports the higher loading speed, is considerably smaller and supports the watchdog timer.  I got it here as text and simply copied and pasted it into a hex file.  Then I used an ISP (In-circuit Serial Programmer, specifically Lady Ada's USBTinyISP) to program it into the Ardweeny.

However, the Ardweeny doesn't have an ISP plug.  That means you have to figure out which pins from the programmer go to which pins on the Ardweeny and jumper them to it.  However, that's not too hard and only drove me nuts for around an hour or so, after all it's only six wires.......

I really like this solution.  It gives me the very latest and greatest bootloader on the Ardweeny and totally supports the watchdog.  Now, some more testing to see which of my parts is temperature sensitive, I may have to break down and buy some freeze spray.
Posted by dave at 2:38 PM 4 comments:

Email ThisBlogThis!Share to TwitterShare to FacebookShare to Pinterest
Labels: Arduino

As I mentioned before, the acid pump fittings melted and the company was sending me a new pump head under warranty.  It came in and I got around to installing it, the day before yesterday.  Wasn't hard, and it seemed to work.  I took a look at the fittings and there are some serious shortcomings to the way they work.  Yes, I realize I'm not a mechanical or hydraulic engineer so my opinion is suspect.  But, there's some common sense things that should have been thought of here.

First, the materials they use simply shouldn't dissolve when they are used for purposes clearly spelled out in their flyers.  They specifically say it will handle concentrated HCl...the pump does, but the nuts that hold the hoses in place don't, they melt.  They say the self-priming height is 5 feet, it's about a foot, maybe a little more.  If the pump loses prime, you have to lift the bucket up to the height of the pump to get it to prime.  The darn thing has a serious tendency to leak.  The way the fittings screw into the pump head doesn't allow the O ring to compress well and great care has to be taken to make sure it seals.

But the thing that ruined the previous set of fittings is the simple nipple that holds the tubing to the pump head. This is what it looks like. 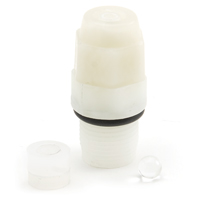 There are several of these, one each for suction, discharge and injection, and each of them have the same shortcoming.  I took this drawing directly from their installation manual: 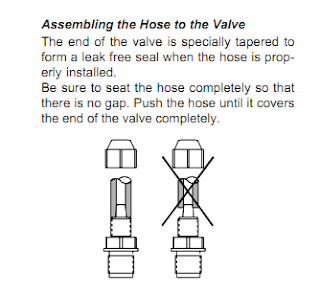 Notice where the tubing is pressed onto the fitting?  This is only about 3/8 inch long and has no barbs; it relies on the compression nut to hold it in place and the compression nut will bottom out on the threads so you can't actually compress it enough.  Any deterioration to the tubing such as aging for a couple of months under pressure and it will start to leak.  So, between the bottom of the fitting not compressing an O ring that should seal it and the compression nut not being tight enough on the tubing, it will fail over time.  Also, notice in the picture above that the nut is a slightly different color?  The nut is obviously made from a different material than the rest of the fitting.  Shouldn't the nut have the same chemical resistance as the rest of the assembly??  Some engineer somewhere didn't think so.  There is a different compression nut available: 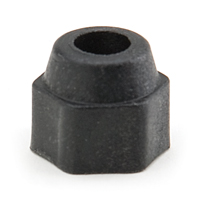 It's a different color and probably a different material.  This one might work, but they sell it in lots of a hundred.  HUNDRED??  What the heck would anyone need a hundred of these things for?  Do they fail often enough that one would need a hundred on the shelf as replacements?  Maybe, just maybe I answered my own question......

I spent a bunch of money on this device and I don't intend to just give up on it.  It's likely that I can find valves that will work and don't have the shortcomings I detailed above, or maybe a little redneck modification can over come the problems.  For example, if I wrapped the threads of the fittings with teflon tape so the threads sealed, the O ring problem might go away since it would serve only as a backup to the threads being sealed.  Similarly, I could wrap the tubing with teflon tape to increase the pressure from the compression nut to help overcome the sealing problem.  Maybe drill out the nipple where the tubing slides on and thread in a barbed fitting for the tubing?

I haven't given up yet.