May 19, 2011 Note:  I took this device off ethernet.  Problems with the WiShield came up and there isn't a device that compares well with it right now.  I converted the display to XBee and it's working great.  The description below still applies for the most part and I'm keeping it for history.  Scroll down for the latest script and description.

I just finished prototype work on a device to display the power usage in real time.  I took an Arduino, Wishield, serial display and some LEDs and cobbled them together and added a ton of code.  This device interrogates my power monitor and puts the value up on the LCD display.  It also forwards the data to Pachube to take the load off my laptop and returns it to its real purpose, surfing the web.  I always wanted an accurate clock so I hit the NIST servers and get the time response back and put it up on the second line of my display.  Now I have a clock to set the rest of the house up with.  Then, because it would be fun, I added a three color LED and code to go from green to red to give an immediate visual indication of the relative power level.

Here it is with a green indicator: 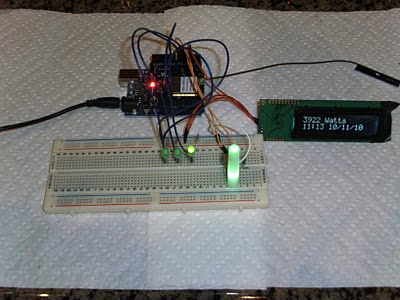 And this is when the power level is high: 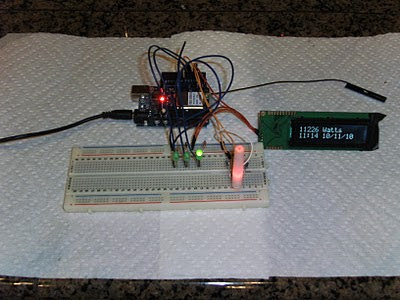 The problem now is that the indicator looks pretty good in the daytime, but at night it looks like I have a Jedi Knight wielding a color changing light saber in the room.  Obviously I need to consider a light sensor and more code to control that as well.  The three other LEDs give me indications of wifi connection and data in and out for making sure the thing is alive.  Not shown here is an indicator on the LCD display that tells me when the power data hasn't updated.  If too long passes without update the device reboots and tries to establish communication.  This is how I overcome power failures that leave the devices out of sync.  Thanks LadyAda!
The indicator light works from 100% green to zero and zero red to 100% so it's sort of yellow in the middle.  I found this to be easy to adapt to.  I also coded different levels for peak and off peak periods such that the indicator shows the appropriate color depending on the time.  During peak periods I max red at 2kW and it moves to 10kW during off peak periods.  Yes, I probably use too much power.
Hopefully, this is not the final form factor.  I plan on something to pretty it up and mount it on the wall.  I'm leaning toward a picture frame kind of display that has room for other data as I develop it.  I would need room for temperatures, wind speed, etc to do this right.  I plan on interfaces to it being over my internal wifi network at some point.
10/19/2010
I got a photoresistor and added it to the system to control the indicator level  (I updated the sketch on this page already).  Now it doesn't light up half the house when the lights are out.  I guess I'm out of excuses and need to start really looking at putting this thing into some kind of enclosure.
11/09/2010
Got a pointer to a company called PacTec.  They had a wall mount cover that is made to fit standard (US) wall electrical boxes.  So, I got one and put the entire device into the box.  I wish someone made a bezel for the LCD displays, and maybe they do, but I couldn't find one.  However, it looks pretty good.  I still have to add a reset button (on order) for those rare occasions when something hangs it up but it's essentially done.
Here's the finished product working its little heart out on the wall 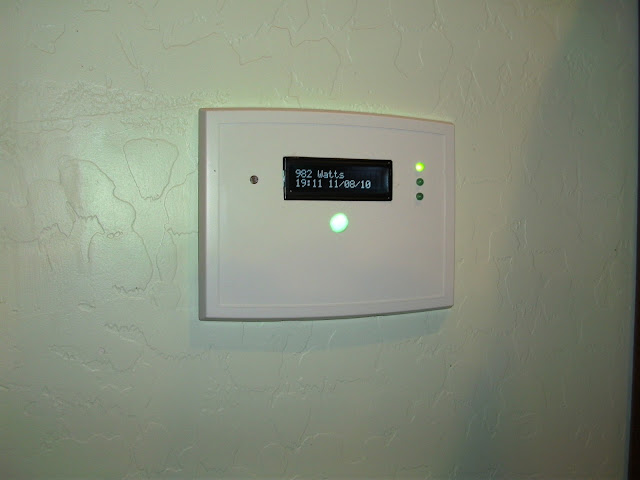 Update Feb 10, 2011:  While I was working on the thermostats (see tabs above) I ran across bezels that would fit the LCD display.  After some careful filing and strategic placement of hot glue, I installed one on this device.  I think it looks nice and it hides the small amount of light that leaks around the LCD display. 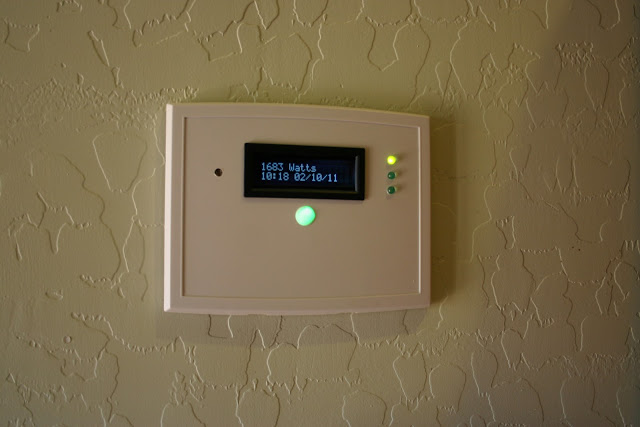 I also heavily modified the sketch to work off the automatic time update provided by the Arduino time library.  It now automatically gets the time from my in-house time server and seems to work very well with the exception of a bug in the house clock (see tab above).  Since this sketch was running out of ram as well, I also added code to move the strings into flash.  The revised sketch is below.
The Old Arduino Sketch
/*
* Sketch to grab data from my power monitor and forward it to pachube.  It also displays real
* power and NIST derived time on a serial enabled LCD.
* Credits:
* Most of the power measurement and calculations were invented by Trystan Lea and documented at
* http://openenergymonitor.org/.  I modified it for the split phase 240 in residential use in the U.S.
*
* The code to get time from the NIST servers was posted by spidermonkey04 on the AsyncLabs Forum at
* http://asynclabs.com/forums/viewtopic.php?f=19&t=152
*
* The clever tricks to POST to Pachube were posted by GregEigsti on the AsyncLabs Forum at
* http://asynclabs.com/forums/viewtopic.php?f=15&t=86&start=10
*
* The idea for the color display was totally stolen from Alan Meany
* http://www.alanmeany.net/ambientknowledge.html  I'm sure I didn't use the same techniques as he did,
* but the idea came from there.
*
* I'm using a ladyada boot rom (purchased directly from her site) to overcome weak network problems
* and multiple vulnerable arduinos by rebooting when necessary.  A lot of the remaining code was
* taken from example sketches supplied by the Arduino site www.arduino.cc
*
* Open source rules!
*/

May 19, 2011:  I had problems with the WiShield and AsyncLabs has stopped producing them.  Shucks, but  fortunately I have already implemented a couple of devices with XBee communications.  Naturally, I went straight for the XBee craft box and implemented an XBee solution for the Power Display.  The ability to update my Pachube feed was already incorporated in the House Controller and time is provided by my House Clock, so who needs the internet?

Since the start of this project I have learned a lot and discovered a bunch of shortcuts and techniques.  The TimeAlarm library that is not mentioned or used very much is especially useful.  Those things that take a few seconds (or hours) to do can be set up and checked on with timers and alarms.  For example, to blink an LED, turn it on and then set a timer for a second from now to turn it off.  One can update a display with a recurring timer set for 5 seconds to update a display and send messages every 30 seconds to update data.  Just set the timer, write the call back routine and away you go.  No counting milliseconds or confusing code wrapped around counters, it just works the way you would expect it to.  You have the benefit of being able to set an alarm a month away if you want.  So, the new code for the Power Display relies heavily on the alarms.  I also rely heavily on NewSoftSerial.  This code just isn't properly understood and used.  I still don't know all the things I can do with it, but I have my XBee connected to a software serial port as well as the serial LCD display.  They work great.

I also discovered tabs in the Arduino IDE.  Yes, I knew they were there, but it seemed like an unnecessary complication when I was writing code.  Then, when working on the House Controller, the script got so long I couldn't find things, I added a tab.  Then another one, etc.  I can separate sections nicely and switch from one to the other when chasing bugs.  So, the Power Display uses tabs, that's why there are two sections of code below; one for the main section and one for XBee handling.

The new sketch is below and I'm keeping the old one above both for a comparison and because it has some cool stuff in it regarding Wifi updates to Pachube, overcoming weak network problems and such.  I like the new XBee enabled Power Display a lot more and I can display the inside and outside temperature using the various sensors around the house.  I repurposed the LEDs that used to indicate ethernet activity to report the incoming data from the XBee network.  The top LED shows a power level packet, the middle a time packet and the bottom one a packet from the House Controller.  There were a few reasons for this.  There needs to be something to show activity to let you know it's alive.  Troubleshooting.  And I had the darn things mounted and taking them out would leave holes!

Update Sept 10, 2011:  I found out that NewsoftSerial uses interrupts and that conflicts with the led indicator that goes from red to green depending on usage.  It wasn't much of a problem, but I wanted to redo that code anyway since I wasn't sure I had done it correctly.  I used the map() function to calculate the values and moved one of the XBee pins.  Works nicely now; at least, until the next bug or change.  The newest sketch is shown below


New Sketch Main Section
/*
* Sketch to grab data from my power monitor and display real
* power and satellite derived time on a serial enabled LCD.
* Credits:
* The idea for the color display was totally stolen from Alan Meany
* http://www.alanmeany.net/ambientknowledge.html  I'm sure I didn't use the same techniques as he did,
* but the idea came from there.
*
* Open source rules!
*/

// This version has changes for using map() to handle the indicator led
// the indicator led was confusing because it works from 255-off to 0-full on.
// And, the green and red work backwards to each other to change color from green
// (low usage) to red (high usage).  Additionally,the green led grossly
// overpowers the red one so it was really confusing to decide how to handle
// this.  Especially when I want to dim it when the room lights are out.
// Otherwise, it looks like a color changing searchlight.
//
// I also moved the XBee SoftwareSerial port to stop conflict with
// pwm pins

// Displays the time on the LCD screen
void showTime(){