Ever wish you had one of those expensive temperature-controlled faucets in your shower my wife did. Since there is a lot of truth to the saying, "happy wife, happy life," I shelled out the money for one. It worked reasonably well, but was a constant source of problems over the years.

This isn't mine, but it's close
I was constantly having to adjust the settings on it. It wouldn't get hot enough, cold enough, have too low water pressure, etc., until finally, years later, I gave up and replaced it. It had gotten to the point where I couldn't adjust it anymore.

Naturally, I took it in the garage and took it apart. 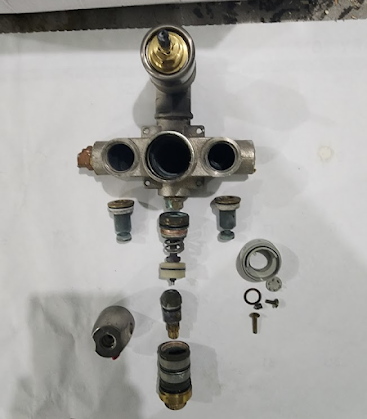 it made me understand why these things cost so much money. Mine was actually four separate faucets in one housing. The top one was strictly volume, and was fed by the three below, and it used a traditional cartridge. That faucet failed first when the cartridge wouldn't seal. It was a hard part to find and is a whole separate story in itself.

There is one faucet to control the volume of hot water; one to control the volume of cold water and the middle one that actually controls the temperature mix. Each of the faucets has the usual o-rings and compression washers, with the middle mixer also having several extra parts to handle the temperature control. Oddly, the o-rings and compression washers never gave me trouble.

That middle section was a different story though. The piece at the bottom of the picture above:

is actually two screens that let water into a mixing area and wraps around all the pieces above it. That set of screens was heavily plugged with calcium from the water. The plugged-up set of screens was the reason I was constantly having to adjust the two other faucets to increase the volume of either cold or hot water available.

Over time, it led to low volume and erratic operation because the calcium would sometimes flake off and increase the flow, or grow and decrease it. I got pretty good at adjusting it until it plugged up so much that I couldn't adjust it any further. The hot was maxed out and the cold was turned down so low that the shower didn't have enough volume.

The brains of the device is this piece in the middle:

It's a bulb full of some compound that has the right temperature expansion characteristics to move the little button on the bottom to slide the o-ring up and down inside the assembly. That controls the hot vs cold mix feeding through the two screens.

I guess I could have soaked the pieces in vinegar for a couple of WEEKS because regardless of what you read on the web, it take a LOT of time to dissolve the calcium from a faucet. Then searched every hardware store for 20 miles to get the right size o-rings and compression washers to replace the ones in there because just putting it back together would guarantee a leak and more work.

I chose the path of the lazy homeowner and just bought a new Moen shower faucet that I could easily order parts for and not have to worry about European manufacturers' parts lists and supply chain bullshit; not even mentioning the expense of that pursuit.
Besides, I had lost the paperwork over the years and had no idea who the manufacturer was anymore.

Putting the new Moen in was quite the experience though. In case you haven't done that ... yet, you have to tear out the wall on the opposite side to get to the assembly. Then, working from both sides, you have to mount the faucet and re-plumb the water lines to fit it. Nothing ever matches anything else when you're changing manufacturers.

I cheated though. Way back when the house was built, the hot and cold lines were reversed by a mistake the plumber made. That was fixed with some inventive plumbing that didn't even come close to fitting the new faucet. Yes, I could have taken that apart and gathered a collection of fittings to do it over, but since they have really good hoses now for hooking up faucets, I just took the lazy homeowner's way out (again) and bought the hoses and fittings to do it in a way that any self-respecting plumber would panic over. 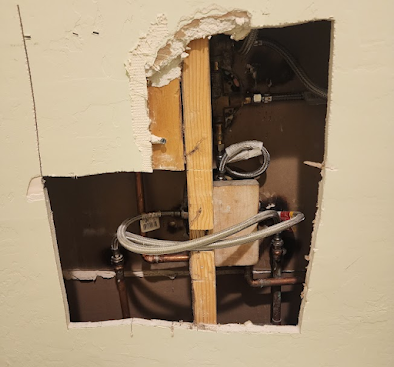 Now, before everyone goes all ballistic on this, these are stainless reinforced and my water pressure hovers around 40 pounds. These hoses usually last forever unless you disconnect them and don't replace the compression washers inside the ends when putting them back. I have these on the various water appliances around the house and have never, ever had a problem with them that I didn't cause fooling around. These things just work.

The cross-over in the middle through the 2x6 is to reverse the hot and cold due to the plumbing mistake that I mentioned. I plan on putting a metal shield over that so I don't make the mistake of putting a screw through the hoses in the future when I close the wall.

The new faucet worked fine and all is well with the world.

Net, if you are thinking about one of those fancy faucets, think a little longer. If you have well water or excessive calcium deposits on your toilets or sinks, it might be a bad idea. If you don't want to have to go through the hassle of a new faucet and a tight job installing pipes; maybe the one you already have is good enough. If you have one of the big names in plumbing in the US, you can get dress kits for it to change the look when SHE gets tired of it and wants to change the look.

That's a heck of a lot easier than what I went through. Think about it for a few years before actually doing it.