I wandered out into the garage to admire my new SSR controlled water heater and noticed that the indicator led was on.  It was during the period when the water heater should have been turned off and that can't be allowed to happen.  I drug out the ladder, voltmeter, and screwdriver and dug into it.  There was no power getting to the SSR control circuit, so it shouldn't have been on, but the indicator led showed there was voltage on the output.  Sure enough, there was a little over 100V on the output.  Could this brand new SSR have failed already?  Fortunately, everything was fine.  I just didn't read enough about the devices.  They have transient suppression on them that is built right into the module.  This transient suppression will allow a little voltage to be seen on an open circuit.  So, the water heater had shut off by opening the switch that operates the heating element.  The SSR was off, but the suppression circuitry was allowing a little voltage through.  Nothing to worry about, but how to test it to be sure?

See, strange readings and unexpected results often happen when you're dealing with 240VAC circuits that use power at 15 - 25 amps.  Leakage of a few milliamps is expected and allowed for in this kind of circuitry for various suppression techniques.  The relay that used to do this job was a real mechanical open circuit, not a semiconductor.

Testing turned out to be simple; just drain enough hot water out of the tank to kick the mechanical heater switch, and then measure the voltage while the SSR was off.  Sure enough, when the element switch closed, the voltage on the output dropped to virtually nothing.  Everything was actually fine.  The little led indicator just doesn't draw enough current to suck it down to zero and will continue to glow.  I also noticed that the led was dim when the SSR was off and bright when the SSR allowed current through.  It's hard to tell the difference between the two levels, and I may look into the indicator at some point and see about correcting this.  It may just need a resistor in line or something.

A few times I mentioned the solar water heater I have.  It works great and keep me in free hot water most of the time.  Yes, it's the desert and during the summer the coldest the water gets is lukewarm, but I get 140F water out of the heater for zero continuing expense except for the few days where it is overcast.

The contactor I have started to buzz.  It works fine, but there is a constant 60Hz buzz coming from it any time it's on.  The first time I heard it, I had to hunt for a while to figure out what it was.  Then, as the days went by, it got more and more annoying.  For those of you that have no idea what a contactor is, here's a picture of the one I have. 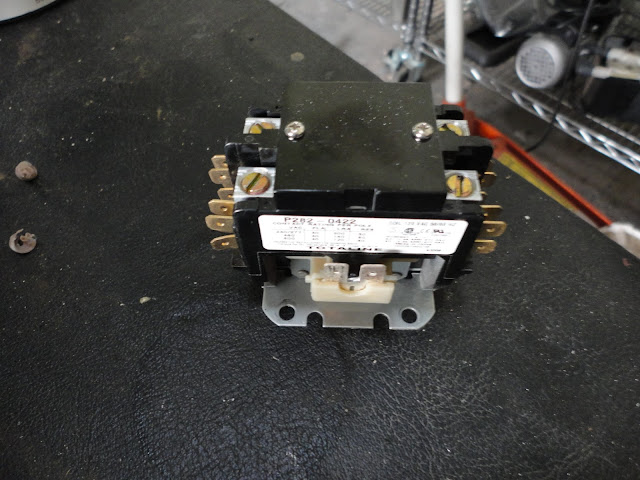 They're really nothing much more than a really big relay.  They have specially built contacts to survive high current switching and lots of places to hook wires.  They are probably all over your house and you don't know it.  Appliances have them, some fireplaces, environmental heating, etc.  Most of them run on a 24V coil and last a really long time.  In my particular case, I used a 110V coil because I was originally switching it with an X10 appliance module.  Unfortunately, the 110V units tend to make noise as they age.  They're not wearing out, they just start to rattle at 60Hz and drive you nuts.  There is a solution, use a solid state relay instead.

So, I got online and started looking for an SSR that could handle 25A at 240VAC.  There's a lot of them out there, but I need two of them, one for each leg of the power.  That made converting expensive, but I kept looking and found a SSR for 240 VAC three phase.  This gives me three of them in a package and I only have to use two of them.  I don't know if I'll ever need the spare, but it's there if I need it.  Here's the device I bought:

Notice that is has inputs for three circuits and one control for all of them.  This is exactly what I wanted.  So, when it came in, I took the entire control assembly off the wall and rebuilt it essentially from scratch.  Here's what it looks like on the wall: 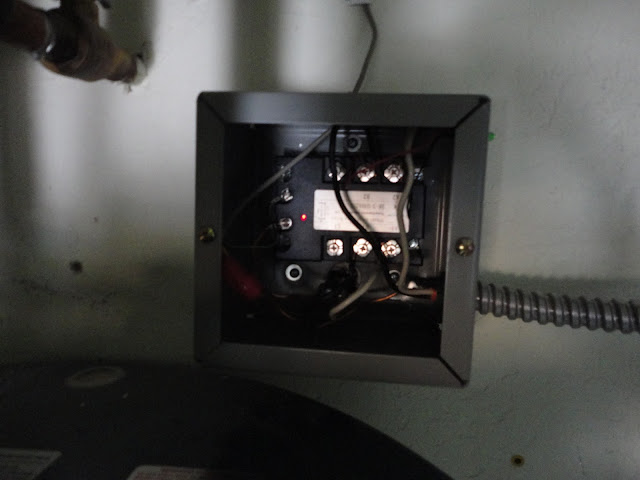 Simple isn't it?  Just one device with the control signal coming in the top and hooking up on the left side.  It only takes a little over 4VDC to turn it on and it doesn't make any noise at all.  Since there are no contacts, it should last forever just sitting there working it's little heart out.

I probably should have used one of these to begin with, but I didn't have a clue XBees even existed when I started out on these projects.  I was convinced by the advertising and various articles on the web that X10 would do the job.

It's sad that I was that naive.