Twice now I've had the level indicator work.  It worked exactly as I wanted it to.  It tripped at around a gallon so I have a couple of days to actually do something about it, and the House Controller indicated low so that I didn't even have to walk by the injector to tell what was going on.  I only added a gallon when it tripped so I could see that it worked when the gallon was gone.  So, anyone wanting to try something like this, here's a working example.

Now, I have something else to brag about.  On to the next project.
Posted by dave at 4:18 PM No comments:

I had an interesting failure yesterday.  Something somewhere stopped working and my data stopped being recorded.  I have no idea if my devices stopped sending or Pachube stopped receiving but something stopped working.  This chart illustrates it:

The ... part is where data was not being saved.  So, there was a period of several hours where data just disappeared into a black hole.  My little devices don't have enough storage to hold something like that so I don't have a clue what went wrong.  Oh well, it's not like I can't interpolate the actual usage from experience, but it really is annoying.
Posted by dave at 11:56 AM No comments:

The glue dried on my latest attempt at measuring the level of acid in my acid injector.  This time it seems to be working.  I used the same float, but hooked it to a rod and led the rod out of the bucket so I could put a switch outside the acidic environment.  Since this one looks like it will work for a while, I'm putting it on my Swimming Pool page, or click here to go directly there.

Acid Pump, What Not to Do

So, I have the acid pump and it runs every other day; now I want to know when it is getting low so I can pour some more acid in it.  I looked at  various methods and asked around for suggestions.  Most of the answers I got, although really good suggestions, wouldn't work.  Ultrasonic had to have a clear path to the liquid level, and the acid fumes would rot the sensors. Capacitance sensors were way too expensive except for the one you can build from foil and sensitive circuits, but they won't last when exposed to the weather.  Weight sensors under the bucket were either too expensive or wouldn't survive the outdoors.  Conductors through the side of the bucket would dissolve eventually in the acid.  Various float devices have metal parts that will rot in the acid. An external tube with a magnetic float inside will probably leak since the input is below the level of the acid.  However, this gave me an idea.

Suppose I suspended a float from a string through the lid of the bucket and hooked the string to a lever on a microswitch?  That actually sounded like it might work.  There would be no weight on the string until the float was down far enough and then it would pull the switch down.  So, I needed to find some string that wouldn't dissolve in the acid as well as a float.  The float was easy; toilet floats are made as cheaply as possible and that suits me just fine because a cheap plastic float that has no metal components will survive the acid.  Home Depot had one for a few dollars so I picked one up.  I looked for PVC string, twine or cord and came up empty, but there is such a thing as Teflon string for sealing plumbing parts.  I ordered this stuff: 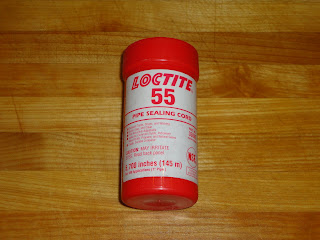 Nice product for packing plumbing threads.  Should be just the ticket.  So, I rigged up a microswitch in one of the duplex boxes that will protect it, attached the string to the float and tied it off to the switch.  After modifying the code in the timer to sense the switch, I was ready to try it out. 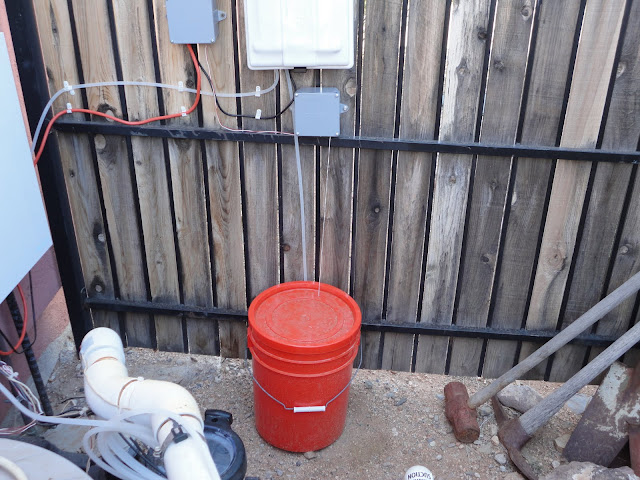 The switch is in the gray box and you can barely see the Teflon string going into the bucket through a little hole in the top.  Here is an inside view of the float: 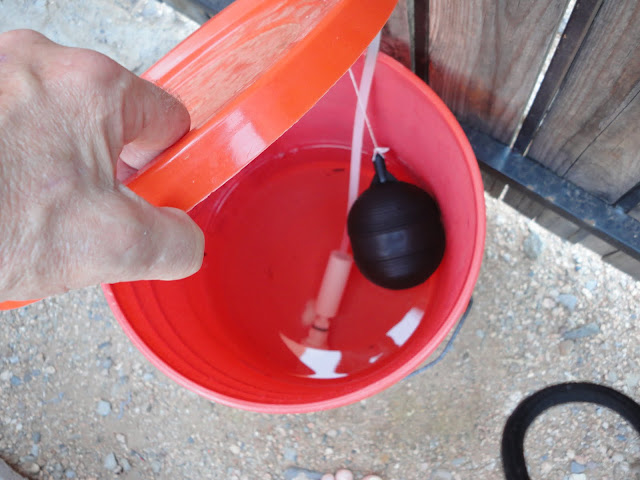 Simple.  The float will only pull on the microswitch when the level is low enough and that should survive the environment.  But....

The string dissolved in the acid.  WTF?  This is Teflon, Teflon doesn't dissolve in acids.  So I tested a bit more of the string and sure enough, it flat out dissolved in the acid.  Drug out my microscope and took a look at it.  It appears to be string coated with a thick layer of Teflon dust or grease or something.  Should work fine for sealing and lubricating plumbing joints (what it was actually designed to do), but the string just goes away in a concentrated acid bath.  So, I got some Teflon tape (had a roll of that already) and used it instead.  I hooked it to the float and then spun the float to twist the tape into a thread.  Worked nicely and then hooked the thread to the switch.  Now I was getting somewhere.

However, the float would move around and bind up on the tubing to the intake for the pump.  The thread bound up on the hole through the lid and the hole in the bottom of the duplex box.  The Teflon would come untied from the microswitch too easily and it was horrible trying to adjust, Teflon is slick and the knots would untie themselves!

Some great ideas just don't work when you actually try them out.
Posted by dave at 1:05 PM No comments: