My Well, A Parody of Problems Part 1 (Pressure tank)

I've mentioned a few times that I live in a desert foothill region north of Phoenix, AZ, and I have a water well. Actually, I share the well with two neighbors. Recently we had a well inspection and two things turned up, one of the pressure tanks was 'waterlogged' and there was coliform in the water. Neither of these are earth shattering, just replace the pressure tank and treat the well and get on with life.

Man I hate it that every thing I get into has a 'but' in there somewhere. I went down to double check the fact that one of the pressure tanks had failed and used the technique that the inspector had used, tap on the side to see where the water level is. Frankly, that's crap. Tapping on the side sounded exactly the same to me at the top bottom and middle of the tank. Actually, all the tanks sounded the same at the top bottom and middle. I got on the phone and called a few companies that service wells to both, check the price of replacement and find out how to test the tank to see if it was bad.

Let's look at what a well pressure tank is. This is what they look like: 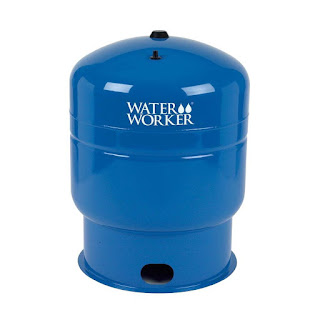 This is from Home Depot and appears a little shorter than it actually is. This thing has plumbing fittings on the bottom and a shrader valve on the top. Inside it has a rubber diaphragm designed to hold air above and water below. The idea is that you pressurize the top with air, and incoming water at the bottom will compress the air and give you a water pressure reserve to keep your pump from having to respond every time you rinse something off. Inside, it looks something like this:

Up on the top, under a black plastic cover is the schrader valve; that's where you check the air pressure. Since the inspector said the tank was waterlogged, if I pushed the little pin inside the schrader valve, I should get water out ... right?

No water came out of any tank and the air pressure read about the same as the water pressure on our water pressure gauge, 30 pounds. I didn't have any idea if a tank was bad or if the inspector was wrong. When I brought this up with one of the well contractors, he told me you have to turn off the water and check it, and that makes sense, but to drain the water from three pressure tanks not only makes a huge mess of mud to deal with, but also takes fifteen minutes or so.

I just gritted my teeth, turned the power to the system off and opened the faucet in the line and let the water drain. I got tired of waiting, pulled one of the pipes loose to hasten the process, and got drenched like everyone else that does this kind of thing, but finally I had the system at zero pounds. Now, check the air pressure on the three tanks, 28 pounds, 26 pounds, 0 pounds. Yep, one of the pressure tanks was bad; it has a hole in the bladder and won't hold air.

The inspector had said that his company could replace the pressure tank for $700, so I called a couple of other companies in the area and they all estimated about the same price for doing the work. Being a cheap sucker, I started pricing the tanks to see if it would save me money to replace it myself. A little while later I pulled up beside the well with a new pressure tank strapped on my trailer ready to do some plumbing. The pressure tank cost me less than $380 (taxes and all) at the local Home Depot.

It took some doing and a 36 inch pipe wrench backed up by a 24 inch pipe wrench to get the old tank out. This is one inch galvanized pipe with unions at each tank to make replacement somewhat easier, so it's tough to work with. Of course, putting the new one in was much easier since teflon tape makes the fittings go together pretty easily, but there were two more trips to Home Depot because you never, ever get the right fittings the first time. Things like the new pressure tank was a little wider than the old one, a galvanized elbow was rusted solid and I couldn't get it loose at all, the usual things that crop up when working with plumbing. This is why plumbers have bin after bin of fittings on their truck; you never know what you need until you start the job.

The new tank's installed, but now I have to check the air pressure on it. This is one of those things that the web will mislead you on. Most of the posts on this say to set the pressure on the tank a couple of pounds less than the water pressure is set for. Fine, what the heck is the water set for? I didn't check it closely enough to be able to estimate two pounds less; I just looked for the pressure to go up a ways, not exactly what the pressure was. Also, one of the gauges is a water pressure gauge, the other is an air pressure gauge, and those things are usually accurate to around 10%. At roughly sixty pounds, the inaccuracy could be as much as 12 pounds off between the two of them.

How the heck do you set the air pressure at 2 pounds less than something that can vary that much? Back on the phone, the most friendly well serviceman laughed out loud at me. "Set it for 28 pounds," was his answer. Seems he went through the same process back when he was starting out and experimented until he got a number that works well in most circumstances, 28 pounds. I set the air pressure at 28 pounds and cranked the system up. 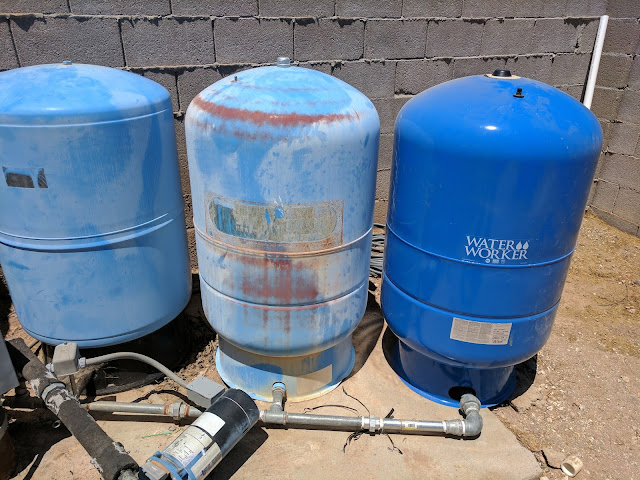 And, the old tank: 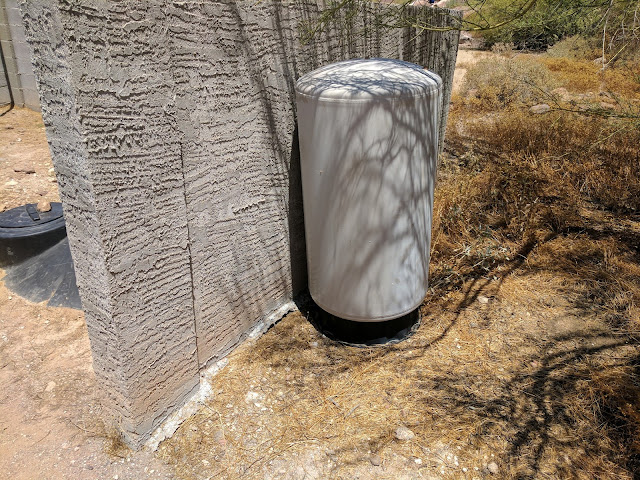 (The plan for the old tank is to use my plasma cutter, cut the tank in two, make a fire pit out of the bottom and a bell out of the top. No one realizes that it will be a HUGE wind chime someday. Don't tell the neighbors.)

No leaks, surface pump ran until the water pressure reached 60 pounds and shut off. Wow, I fixed the well and saved us close to $350. I wanted to be sure that everything else was OK though so I decided to cycle the system a bit and opened the various electrical boxes to see how to control the equipment.

There was a total mess of marginal and downright wrong connections, old wiring that was loose, and circuitry that circled back on itself for no apparent reason. There were even things that should have been power sockets, that had nothing under them and wires that were hot that didn't seem to go anywhere on the pump system and came from somewhere other than the main panel from the pump.

Crap ... this needed to be fixed. Over the years, various people had done repair work to the well as things failed, and apparently, they did the very least they had to do to get it working and never got back to fix it right. This just compounded the possible problems over time until I had a mess to fix for the community well.