So, when I started trying to put things together, it got so darn complex that I changed a ton of stuff to make it somewhat simpler, at least for me.  Here's the current display: 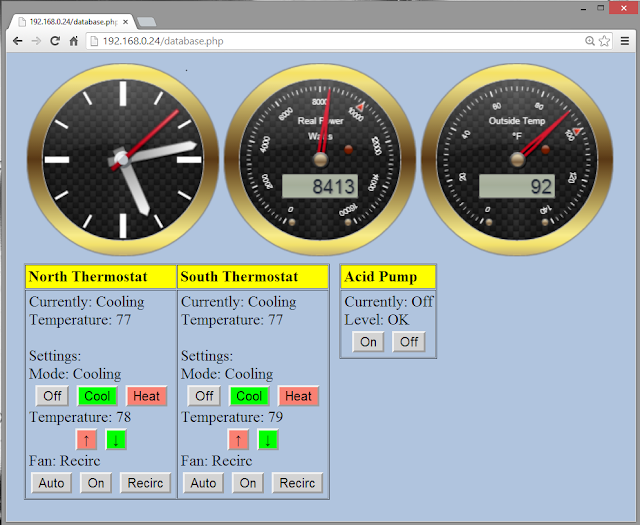 The buttons don't do anything except show an alert to prove they do something, I still have a number of devices that I have to include, and there's a ton of stuff to pretty it up and put in some presets I've grown used to.  I currently have presets for things like A/C off, summer night settings, winter night settings, that kind of thing.

All the data is live and real, including the SteelSeries gauges up at the top.  Sorry, it isn't on the internet yet, I have to wait until I get it finished enough to turn off the old controller before I can put it online.  I broke the web interface into two components, one that presents the web page and the other that sucks things out of the data base and hands them off to the web interface.  The code to create a complete screen was just getting out of hand, so I split it apart.

This gave me the opportunity to try out tables and colors and things, as well as experiment with getting data out of the database to construct a JSON response.  This actually turned out to be relatively easy, but it drove me nuts thinking of variable names.  I got to mess with jquery() which turns out to be quite a workhorse and makes things even simpler.

I'm starting to get tired of reading tutorials on various things.  But the single most annoying thing is the difference between comment delimiters in the various languages.  Heck, you have to use multiple different kinds in a single web page ... silly.

I'll do a post on the overall architecture of the system soon, I want to conquer the buttons and build in the rest of the devices so I can replace the current controller.  With the way things have been going I'll probably change the architecture two or three times before it's done.

With the cost of tablets dropping, my ultimate plan is to have a couple around the house that are used to control things.  Y'know, one of them by the bed so I don't have to get up to change something.  The ultimate remote control.

Heck, I may hook the barbecue up to it someday.
Posted by dave at 6:02 PM