Don't you dare make fun of the title of this post.  Yes, it's a bit presumptuous, but I couldn't think of anything else.  After a lot of experimenting and trying to overcome various problems, I finally settled on an architecture of the various devices and controls that I think can work over time.

Let's talk about the XBee network I have as an example.  I have a network of XBees that monitor and control things around the house and this has to hook into the Pi.  So, in an earlier post, I discuss how easy to hook into the Pi it was.  Now, that I've used up the only serial port on the Pi, I ran into a problem.  Only one process can reliably hook to the Pi's serial port and communicate both ways.  If you have two processes talking to one port, bad things happen like overlaying data, seeing a character come in and not being able to get it because some other process got to it first; that kind of thing.  This isn't like an arduino where there is only one piece of code that needs this stuff, there's a number of them. So, what to do?  Functionally, the entire process interaction looks like this: 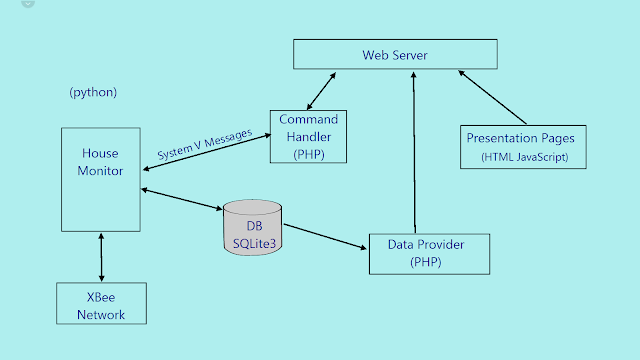 The House Monitor box is a process that runs all the time and constantly monitors the XBee network as well as periodically interrogating the ethernet devices.  When data comes in, it updates the database with the current readings.  It is the sole interface to the XBee network.  To get commands from the internet to do something like open a garage door, the web page sends a jquery() PUT to the command handler who forwards it (translating on the way) to the House Monitor.  The house monitor forwards it along to the XBee network.  In due course, the device will receive the command, do whatever, and send back a status that is recorded in the database.

If I load one of the presentation pages, it will send a jquery() GET to the Data Provider code that will suck the data out of the database and hand it back to the page for display on a user's browser.  The web pages have a timer running on them that refreshes the data every so often so it can be used as a monitor of what's going on.  For example, the swimming pool does several things on its own, like turn the motor on high in the morning, drop it to low for a while, then finally turn it off entirely during the peak period.  Each of these things is caught by the House Monitor process and recorded as the current state in the data base.  So a presentation page will update and show that the motor did its thing.  If I open the garage door, the garage controller will report it and House Monitor will stick that in the data base too.  Basically, the database is the holder of all the current status of devices, including the current power usage.

Doing things this way, I can make an interface inside the house that talks directly to the House Monitor and it can control stuff with no delay (other that what's required to do whatever it is).  The idea is that the House Monitor process is the thing in actual control, other software and devices talk to it.

I separated the presentation from the data gathering so I can change an HTML page anytime I want to without worrying about how the data handling will have to change to support it.  This way I can mess with tables, pictures, colors and stuff without accidentally screwing up the data handling.  It also hides the database entirely away from the web, so certain hacking techniques can't harm it.  It also means that I can have multiple presentation pages without having to duplicate the way I grab stuff out of the data base.

I also got ALL the devices I update to the various cloud services talking to the Pi.  I have updated my account on Xively to the latest stuff they came out with and am recording the actual readings there every minute or so.  I may lose the old data, since they still haven't given me any way to move it into the new system.  Or, I may just write a python script to suck the data out and put it back into the new feeds.  It would only take a few million transactions to get it here and put it there.  He he.

Code?  You want me to show you the Code?  Actually, there's nothing secret about it and I'm totally willing to share, but I'm going to hold off a few more days until I can remove the old controller from service and reuse the page it is described on.

Physically, the Pi is naked, no box, no special lights on it, and hooked to a breadboarded XBee.  Nope, I haven't even started looking for something to put it in, or decided if I want it to have a display.  It would be nice to have a display that shows something, but there are so many possibilities that I'm kind of stuck deciding what to do.   The odd way they constructed the little board doesn't lend itself to any simple ideas.  It'll work out in time; I may just use a cardboard box. 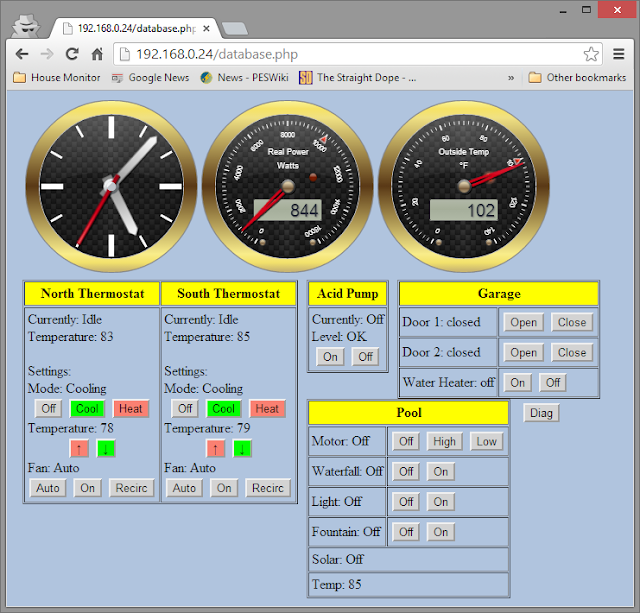 Yes, the gauges reflect the very latest readings from the sensors, the boxes show the real state of the various devices, and the buttons work.  It isn't very pretty, but I wasn't working on pretty.  Actually, I made all the boxes float so they display in different places depending on the resolution of the browser.  I can see all of them on my phone by just scrolling around.  This part will be constantly modified as I think of something to try out.  It's just a presentation page and I don't have to change anything else to make it look completely different.   Oh, the little diag button up there will expand into a scrolling screen of debug information; makes it nice to see some of the underlying communication when I need to.

Less than an amp of power and roughly fifty buck so far.  Go ahead, try and beat it.
Posted by dave at 5:22 PM