Raspberry Pi, Getting Control Of The Devices

Still making progress on this thing. There's a little pressure to get it finished since I want it to take over the house control functions. I managed to get the buttons working to control the thermostats and next is my first XBee device, and it is going to be painful. I haven't found or experimented with a php library for controlling the XBees so back to searching the web for clues. Meanwhile, I was having a lot of trouble getting the various syntax correct and was also having some trouble with the command to the devices. I needed something on the web page to tell me what was actually going on that could maybe become a monitor of the network internals. I sneaked the code that I use to put up the code boxes on this blog and shoved it into the controller web page. It worked like a charm; I was even able find a way to force it to scroll to the bottom as new items came in. This could turn out to be a great way of monitoring actual conversations between devices later when the entire device set is hooked in. Here's an example of it in operation: 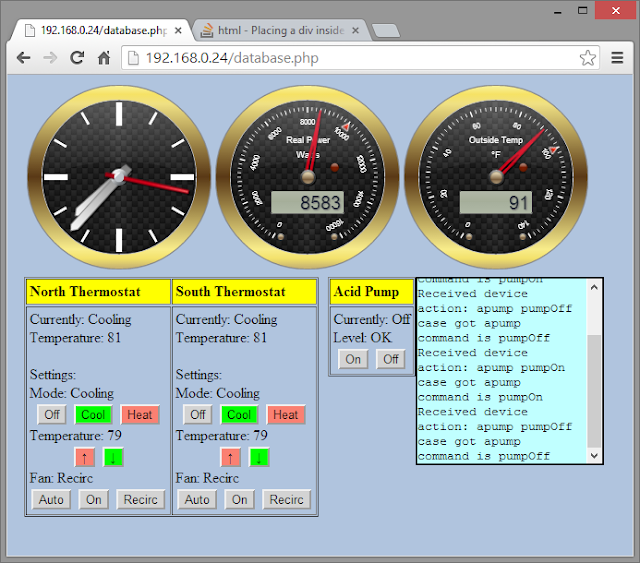 Recognize the blue box?  It's got a bunch of debug on it from me hooking in the Acid Pump, but that particular piece doesn't work yet since it's XBee controlled.  It's actually pretty easy to hide things in web pages, so I may hide it and put a button up to show it when needed.  There's actually no limit to what kinds of things I can do now that I have a real web server running to present the data.

I still haven't settled on the entire architecture.  I have a background process that collects data from around the house and shoves it into a database.  Then the web page interacts with a php file to suck the data back out.  All the buttons connect to another php file that translates the clicks into commands that are tailored for each particular device since they are all different from each other.  Yes, I screwed up and made them different.  But as I went along, I learned things and did them differently as each new device came online.  Actually, the separation from data display and command makes it easier to add in a device.  I construct a basic page, implement the commands, and go back and play with presentation.  Since presentation is a never ending task, it's nice to have it isolated.
Posted by dave at 8:10 PM