I live in Arizona USA just north of Phoenix in the foothills. Power here is supplied by a company that calls itself "Arizona Public Service," that is an owned subsidiary of Pinnacle West Capital Corporation. I'm bringing this up because they've managed to get two rate increases in the last 12 months. This is actually not that unusual in this country, power companies are considered a "public utility" and given a service area in which they are a monopoly. Since they are a monopoly, they are heavily regulated and watched by some political entity; in the case of Arizona, it's the Arizona Corporation Commission. Additionally, the commission is responsible for making sure the utilities they oversee make a reasonable profit.

What an incredibly wonderful position to be in. To have a public commission that will guarantee you a profit no matter how bad a business you run. That MUST be worth a few regulations that may be somewhat annoying. I bet it also accounts for some of the high salaries they report...

Boring right? You probably clicked off the site about the middle of the first paragraph; I don't blame you.

The reason this is important to me is illustrated by the following screen shot of a rate calculator APS (the aforementioned jerk company Arizona Public Service) put on their web site: 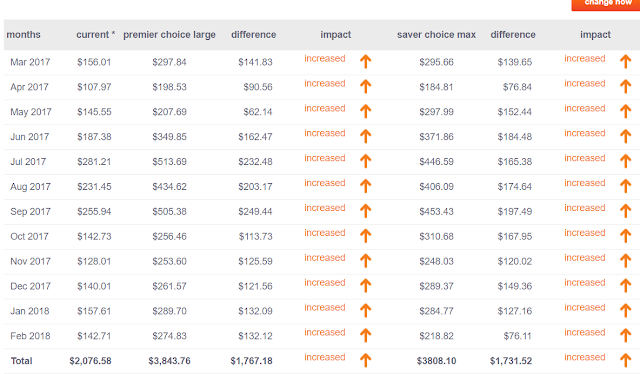 Zoom in if you have trouble reading it.

This is a comparison of two of their rate plans compared with the plan I currently have. Notice the "difference" column for the two new rate plans, "premier choice large" and "saver choice max" and how much the difference is between the money I'm paying now and the money they project I will pay in the future. No, that isn't a typo and I didn't take photoshop to the screenshot, I'm projected to see an increase in over $1700 for a years worth of power.

Kinda makes you wonder why such a thing got past the regulating committee AZCC (Arizona Corporate Commission) doesn't it? Of course it couldn't be because all but one of the Commissioner's campaigns was heavily financed by APS could it? Of course not; we have the best commission money can buy.

Like most of this country our power bills are cluttered with a ton of little charges to disguise what is actually being charged. There is a charge for renting the meter we're required to have, a charge for reading the meter, a charge if we don't have a 'smart' meter which is read remotely, a charge for billing us, a charge for preparing the bill, ... you get the idea. As a matter of fact, my well power bill is literally half these charges and the other half is actual power used. (Yes, I can prove it.) I'm still wondering why I pay to rent a smart meter that is read remotely and being charged for reading it. Something there doesn't make much sense.

Leaving the whining aside, what the heck is with an increase of over $1700 a year? When they presented the rate plans they predicted a 4.5% increase that should average out to around $6 a month. This is the kind of thing they managed to push through the AZCC. It took them over a year of hearings and testimony to get the increase, and part of the settlement was the rate calculator they created. The calculator was designed so people could make an informed decision which plan they would go with in the future since APS is removing all the other plans people have had for years and years.

Well, after a few phone calls where I had to convince the APS representative that I was right, I finally figured out what the heck was going on. The calculator is pure crap. The calculator takes into account the actual time usage of the home and applies it to the new rates. Since I control my power and keep my peak usage way down, the calculator goes nuts.

That probably means that my bill will be considerably less than they predict, but it also means the calculator thousands of people use to make an informed decision is wrong. Nice job folks.

It also means that thousands of bills will be calculated by the same computers and the same software written by the same programmers that came up with this mess.

Yes, I filed a complaint with the AZCC and wrote letters to both of my state representatives about this very thing. Never had much luck with either of those, but