Grafana: Now to get it working on a Raspberry Pi

Last post I talked about how I got Grafana working on my desktop talking to my database. It actually worked pretty well. Unfortunately, the laptop is NOT where I want it to run; I want it to be running on one of my Raspberry Pi machines. Since I have one of the Pi 3b's and, it isn't doing much of anything, I put it there.

Like almost everything related to linux, this was a pain. It seems that since I last played with that little machine, there have been two major updates to the OS. They went from Jessie to Pixel to Stretch. WTF?? Are the folks at Raspberry Pi running out of things to do?

Fine, I downloaded the minimal image of Stretch and wrote it onto an SD card, made a couple of changes to the boot init files to run headless and booted it up. That worked first try. They really did make some improvements in that area. No gritting your teeth and closing your eyes before rebooting; it just worked. Then I went looking for a Raspberry Pi version of Grafana ... Guess what? Grafana doesn't make one !  Fortunately, there's a person out there that took this job on for the rest of us. The github user 'fg2it' has created a github repository that holds Grafana for the various versions of Pi OS's and it's relatively easy to use them --- after you figure out what the heck he is doing. The repository he created is here <link>, and in the instructions he does a cool trick of updating where Grafana is installed from, then used apt-get to install it. I stumbled over that for a while before I got it working. Really, really clever way to do it.

Aside: I ran into instruction after instruction for installing Grafana on the Pi, and almost all of them referenced back to fg2it's repository but, tried to take the credit for all the work. The slimeballs only referenced fg2it in the various commands. You'll see what I mean when you go looking around. Thank you fg2it.

I installed the 'Stretch' version of Grafana on the Pi I had just updated and made the simple changes necessary and it worked. I could log into Grafana and create charts that I copied from the laptop version I had used previously. Everything worked pretty well. Next, I added some more charts and explored a bit. Here's the way it looks right this minute when I load the graphs up on my laptop:

This is produced by Grafana running on a Raspberry Pi displaying on a Windows laptop and getting stored data from a MySQL database running on a QNAP network appliance. Cool !

Yes, since it's only a web page, it works on a phone as well: 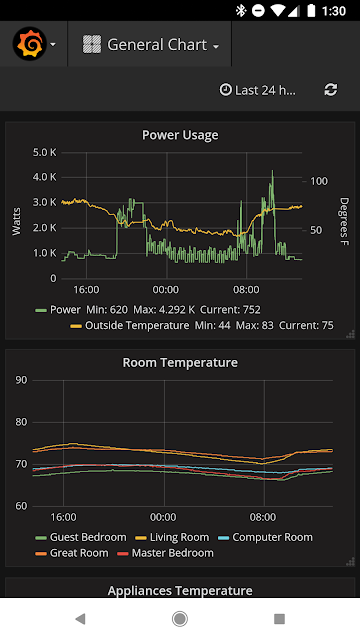 You do have to scroll down on the screen to see all four of the charts, but that's the way it should work on a small device.

There's a ton of features I haven't played with yet, and I'll get to some of those over the next few days, but first I want to protect my database and figure out some way of offering this up on the web. It may get complicated since this machine can't be seen from out there.

Also, this machine only has an SD card on it. I had to leave the usb solid state drive out of the installation to get this much running. That will have to change since I've never had good luck with the SD cards. Three - four months and they crap out leaving you with a days work getting it running again.

Note that I have no dependency on any cloud service at all. It's my database, and all the software runs right here in the house.