As I've driven you nuts with in the past, this is Arizona USA, and it gets hot here. That pushes our electric bills through the roof for about half of the year. Some of us are taking measures to lower this expense and still maintain a good standard of living. Doing this isn't cheap in the short term, and most of us that pursue lower costs hope to live long enough to recoup some of our outlay.

It's not likely, but it gives us hope.

I have a neighbor that is going for it in a big way. He's working on geothermal cooling for his house. Sure he could have hired a company to come out and destroy his property and put in some half-baked system that he didn't understand, but instead he bought a backhoe and went to work. In this description (I have his permission) I'm not going to mention how close a neighbor or give any directions to his place. I'm also not going to name him, we'll call him George for this discussion. It's not his desire to have a bunch of people stopping by to look at his work or some government official taking credit for it.

So, George got the idea when he put in a well without a well bottom pump. Instead he used air pumped down the hole to percolate the water a few hundred feet up a pipe into a storage tank. For those of you that understand this, that means no moving parts at all in the well; nothing to break or have to be removed periodically for maintenance. Slick and it works like a charm. He had a little trouble intially with the ground level compressor, but it's all worked out now and runs every day. This was a big win and will pay for itself (the pump part, not the water well) in a short time.

First, he has a huge obstacle to overcome - the heat. The hole can't be six feet deep and cool anything because, like the cold country, the surface temperature reaches down that far. He decided to go deeper and wind the hose that will carry the cooled fluid into a big pit. He'll then pump the cooling fluid up to a heat exchanger of some kind transferring the cool to potable water that can be used to condition the air in some fashion. Current thinking is to just use a swamp cooler and circulate the water with the geothermally cooled water.

His backhoe is bigger than mine and he started the project by digging a small area a couple of feet deep. If you've been a reader of mine, you know what the soil is like here. It's basically rock held together by caliche with a shallow layer of extremely sandy organics for a surface. I did a post about a simple one cubic foot  hole I dug and what I got out of it that you can look at to illustrate the situation <link>.  This led to changes in his technique, modifications to the backhoe, and tons of debris (literally tons). 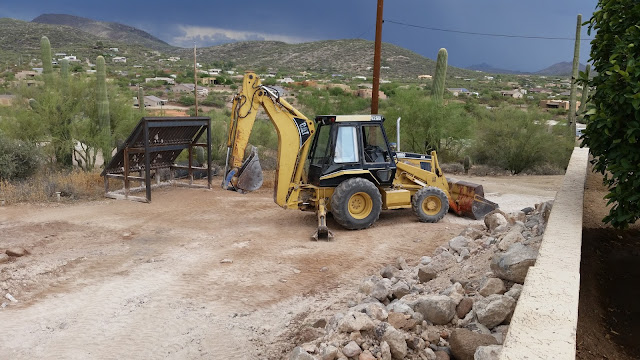 Here's his backhoe and the really cool rock screen he made to separate the rocks from the finer material (can't call it soil). For those millennials out there, the backhoe is the thing with wheels. To use the screen he dumps the material he dug out on the far side and the small stuff falls through leaving the rocks behind. Then he takes the rocks and piles them somewhere out of the way. The small stuff he'll use to refill the hole. 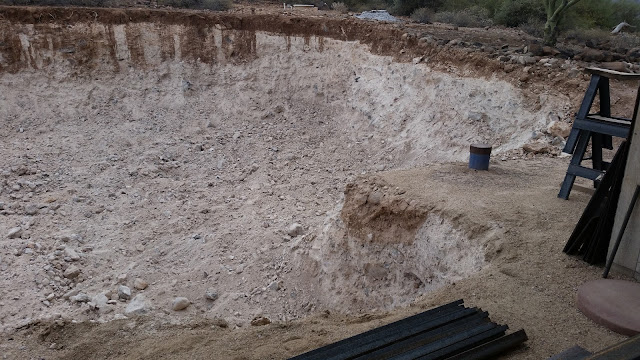 This is the beginnings of the hole. Notice what I was writing about the composition of the ground: a tiny layer of sandy organics and rock bound caliche the rest of the way down. Ever wonder why the desert doesn't have trees? Now you know. 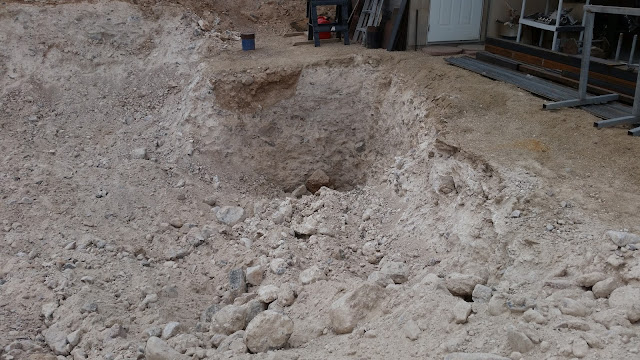 There was a big granite rock over there that had to be dug around. 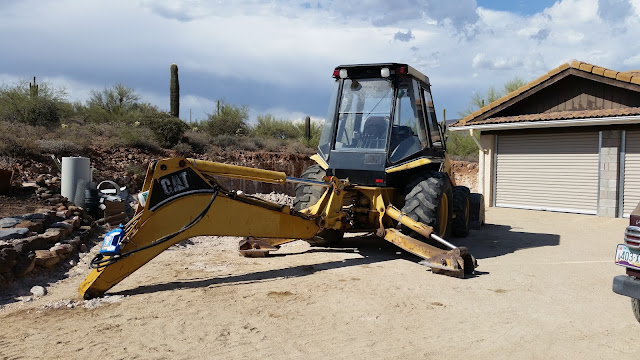 And, sometimes, bad things happen to the equipment. This took some time to fix, and wasn't the only time the machine broke down. From the beginning of the project to now, he has rebuilt most of the digging parts of the tractor. Only minor problems with the motor, hydraulic pump, and such, but everything that came in contact with the dirt had some time wasting problem or other.

But, let's look at the hole again. Here it is a little deeper. 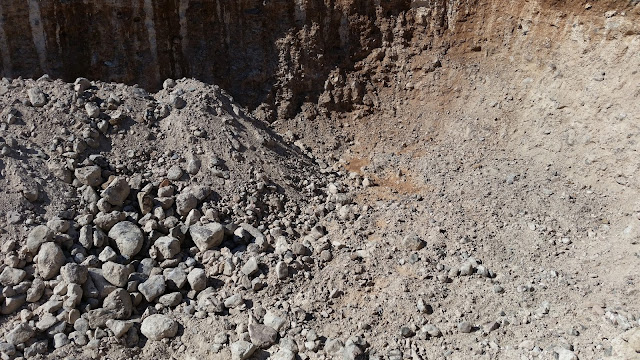 And, here it is finished. 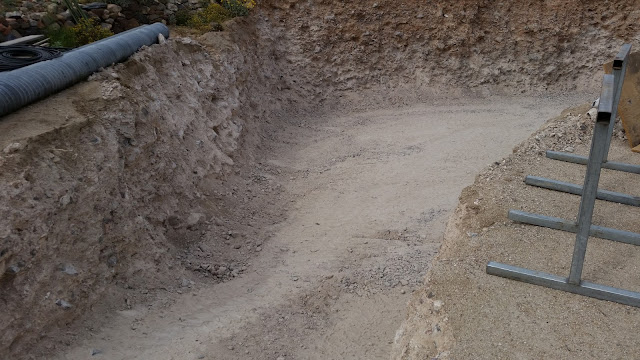 Notice that it has a ramp leading down into it? That's so he can actually get the backhoe down into the hole to dig, and then get the dirt out. Also notice how the dirt layer seems pretty deep on the far side; that's where the rain washes down and carries some mud with it. This project has been going on for months, so some weathering is expected. Here's a shot of the bottom on the hole, he back filled it a little to cover the rocks. 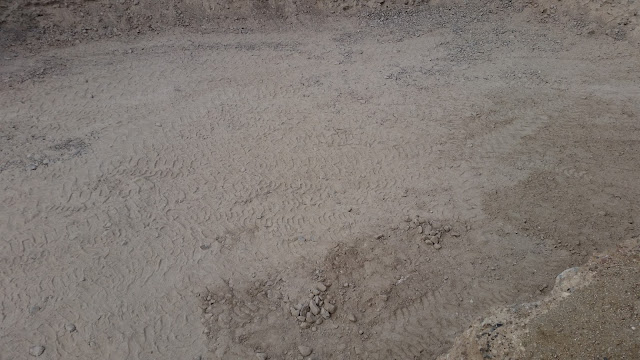 Eventually, he'll install coils of flexible pipe in the hole, protect them to some degree and then fill the hole back in. Pumping water down into the pipe will circulate it through the cooler material down there, and then he will transfer the cool into his house. This will work to warm a house also, but not much need for that here. Bet you're wondering where the rocks I talked about are. 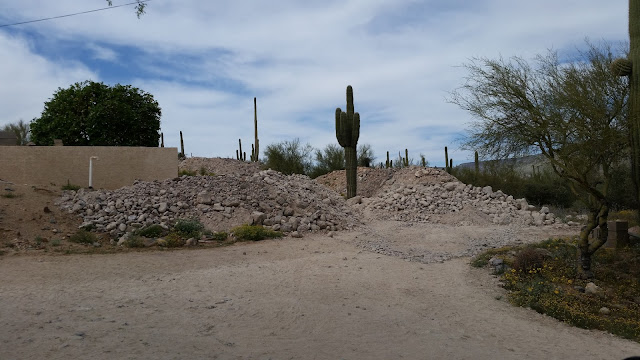 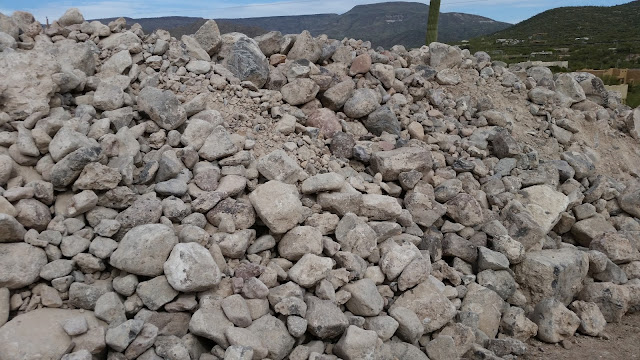 No, not all energy saving projects taken on by individuals are small. Sometimes to have an effect, you have to think bigger than a tiny computer and some wall switches. The beauty of doing this kind of thing is that your skill set increases exponentially. It makes you understand the reality of what can be accomplished.

I'll be following this project over the next months, more later.
Posted by dave at 12:51 AM