Rocky Soil in the Desert

Today I am working on a continuing project; a deck on the East side of my house.  I didn't have it built when the house was constructed because I wanted to move in.  I was living in a motorhome on the edge of town commuting out to the house each day and that was getting old, so I had the house inspected and moved in without several patio areas.  This is the largest and will take the most time and money to build.  Enough background, I had to dig a hole to put in a support to keep the deck from bouncing and sagging.  This is one of those pre-made ten inch concrete things that you put under things to hold it down in the wind and support it when walked on.  Normal stuff.

So I dug a hole roughly 18 inches square and 12 or so inches deep to hold the support; here's a picture of it. 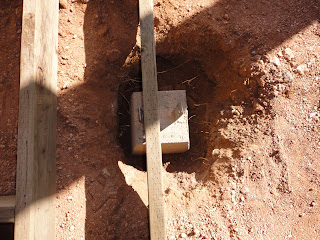 No big deal right?  Well, this little hole took me a couple of hours to dig.  Why??  well, here's the pile of rocks I got out of this one hole: 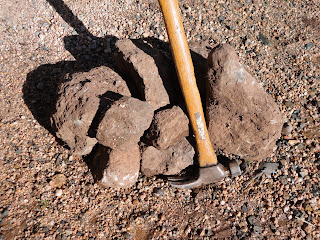 I put the framing hammer there to give you a sense of scale.  There's enough rock there that I couldn't possibly fit them back into the hole.  Each one of them had to be pried out of the ground with a 6 foot, tempered steel rock bar.  There wasn't enough dirt taken out of the hole to fill it back up even after I put the 10 by 10 hunk of concrete in it.  It was all rock like this with coarse sand holding them in place.

Shovels are for moving the coarse sand around, picks are for loosening the rocks a bit, and rock bars are for leveraging them loose enough to lift out of the hole.  You DON'T just go outside and dig a hole, it's a major undertaking.