I have had nothing but trouble with my pool since about a month after it was installed.  Sure, it's fun to laze about in it on the hot summer days; it makes desert life bearable, but darn it's hard to take care of.  I have a salt water pool as mentioned several times in the tab above labeled "Swimming Pool" <link> and that generates its own chlorine, but that creates "Ph creep", which I deal with by pumping acid into the pool at regular intervals using  an Acid Pump <link> that I created.  However, there's still problems.

See, I have a cartridge filter instead of the more traditional diatomaceous or sand filter.  These things require cleaning and replacement.  Cleaning can be as often as every couple of weeks in dirty weather or a few months when there's no sand storms, bug migration, tree blooms, or dirty dogs to mess it up.  However, this year I've been pestered by caterpillars, crickets, beetles, frogs, sandstorms, and tree blooms such that I've had to clean the cartridges several times.  Add to that the calcium carbonate snow that accumulates due to the chlorine generation and summer has been a pain in the pool department.

I decided to get a pre-filter to get rid of some of the crap to keep the work load down.  I got one of these: 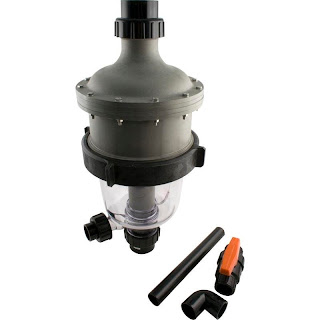 This is the Waterco Multicyclone 16.  Basically, it's a Dyson vacuum cleaner that works for your pool.  It goes after the motor and before the big pool filter and removes most of the crap before it gets into the filter.  Theoretically it should keep me from having to clean the cartridges as often, maybe as little as once a year.

Frankly, I'm skeptical.  However, after looking at the various videos and hunting around for honest reviews of the thing (I couldn't find one), I took the plunge and bought one.  I just installed it today, so I don't have a history to call on, but I can say that it wasn't hard to install and looks like it's doing what they say it does.  Here's the installation: 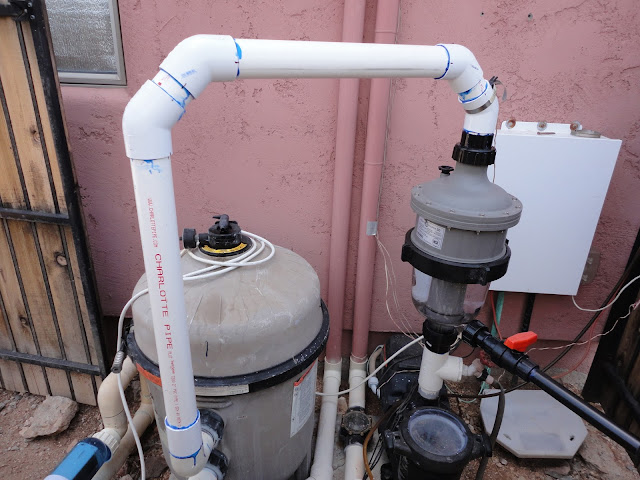 Yes, it's tall.  I could have mounted it closer to the pump, but then I would have had to get a new drain faucet and it would have only been six inches shorter.  I used two 45 degree fittings because 90 degree fittings impede flow and I wanted all the flow I could get.  The idea of the pump is that the water goes up through a pipe in the middle, swirls around through 16 cyclone fixtures inside where centrifugal force removes debris allowing it to fall to the bottom of the clear area where it can be discharged using the red valve at the bottom.  The cleaner water then goes to the cartridge pump and gets 'polished' before discharging into the pool.

I used the glue technique I learned when I was working on the solar heater.  I found out that to get the absolute best seal, forget the normal PVC cement and purple primer, go directly to the blue 'Red Hot' cement and forget the primer.  That little trick took me almost a week and calls to the pipe manufacturer to discover.  Here's a picture of the filter in action: 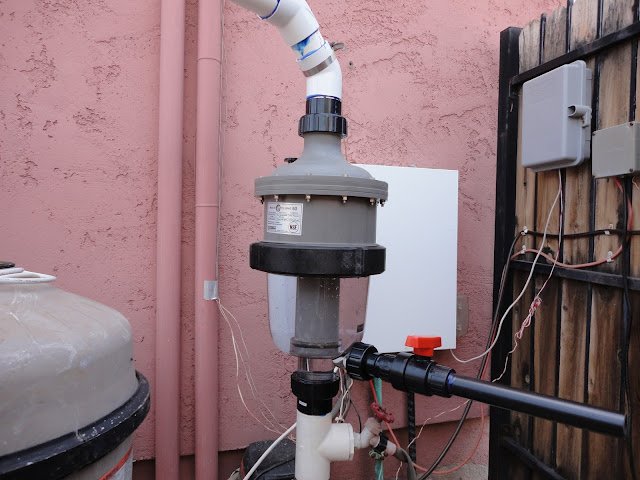 No leaks !!  You really can't tell from this picture that there is water in there, but I expected it to be swirling around; it didn't.  The cyclone action is all in the top section and the relatively serene clear bowl at the bottom is just clear water.  At least it was clear at first.  Over the next 20 minutes particles started to appear in the bowl, then a bug, then some of the white snow created by the chlorinator.  After about 20 minutes, I purged it by opening the valve and everything that had accumulated shot out the pipe to the side.  So far, it is doing exactly what they claimed.  Just before I purged it, I took this picture of the bowl: 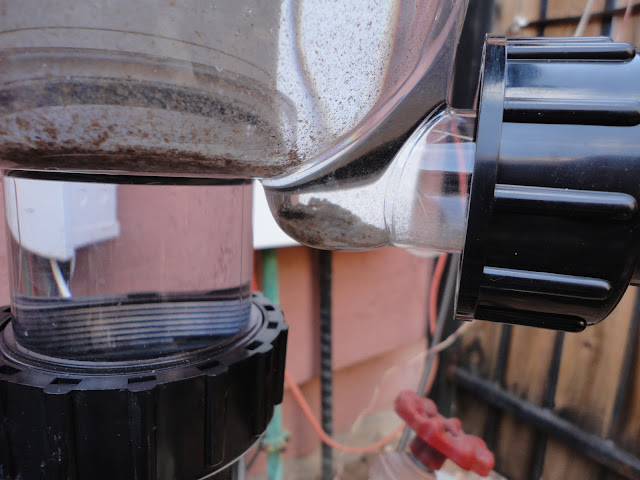 See the accumulation at the bottom and in the discharge pipe?  That's after 20 minutes !  Yes, that's the kind and amount of crap that is getting into the cartridge filters and clogging them up.  I suspect I'll be purging this thing every couple of days during the dirty season.  That is after the new wears off; right now I purge it every time I go out there because it's cool to watch the debris shoot out.

In all honesty, I can't recommend this device for other people yet, I haven't had enough experience with it yet.  However, if the accumulation of particulates is any indication, this thing works.  I'm going to watch it like a hawk for the next week or so (naturally, it's new and cool) then determine if it is actually doing the job it's advertised to do.  I'll hook up the vacuum head and clean the pool and see what happens when I flood it with the stuff that hangs around on the bottom of a pool in the desert; that should be a good test.

At any rate, stay tuned, I should know more in a few weeks.

Edit: I've had some experience with it now, more information here <link>
Posted by dave at 2:47 PM