Part one of this is here <link>.

It's been a week with the new pre-filter on my pool and I can actually say that I'm satisfied.  No leaks and it works as advertised; nice device.  Here's what it accumulated in the reservoir: 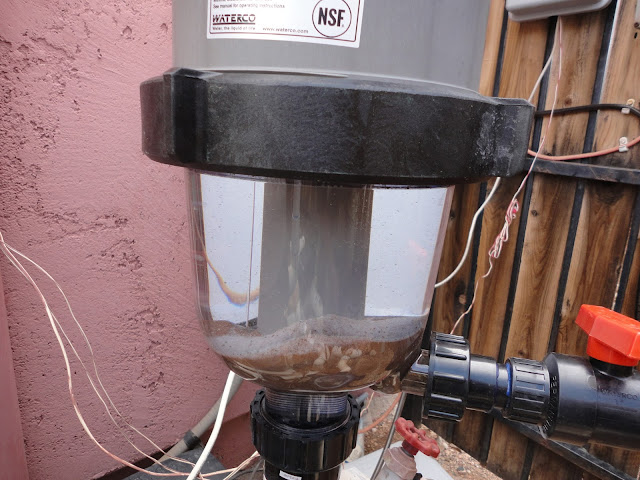 Yes, this is a weeks worth of the sand and stuff that would have been starting to plug up my cartridge filter already.

The white layer on top is the calcium carbonate and calcium sulfate that is created by my salt generator.  That's the stuff they call 'snow' that accumulates in the corners of the pool and annoys the heck out of me.  This filter catches that stuff and keeps it from getting into the cartridges...nice.

Now I feel comfortable recommending this device for other folks to use on their pools.  I don't have enough experience with how much it will save me in the longer term, but if it keeps me from having to clean the cartridges every couple of weeks in the stormy season, it's worth every penny I paid.  Cleaning the filters tears them up over time forcing me to have to buy new ones.  At almost 90 dollars a cartridge and having 4 of them in the filter, it adds up in a real hurry.  Just saving me just one purchase of replacement cartridges will pay for the cyclone filter.

The fact that it's capable of filtering out the 'snow' gives me an idea.  If I put another one in the path of the chlorine generator, it should remove the snow before it gets to the pool to annoy me.  This would also lower the calcium level in the water because I would be constantly removing it after the generator formed it into the snow.  That would be good if it didn't lower the calcium level enough to cause leaching from the walls of the pool.  I don't have enough money to experiment with that right now, but maybe in a year or so I could get another one and install it to remove that stuff.  Heck, two of them might be enough to get rid of the cartridge filter entirely, or scale it back to a much smaller device that doesn't cost so much to maintain.  I have to worry about flow rate though, smaller filters may not have enough flow.

At any rate, if you live in a dirty area and have to clean your filter unreasonably often, this is a good device that just may relieve some of the burden and expense.  I really like it.

It's been a while now that I've had this in operation and a reader asked me for an update. First, there has been exactly zero problems with the construction or operation of the device. However, last year I had a flood and the pool filled up with muddy water that washed in. This completely filled the Waterco filter and the cartridge filter I have down line from it. This pushed the water pressure up so high it blew the fitting on the top of the filter off. That, in turn, stripped the threads so the union fitting wouldn't hold unless the pressure was less than 15 pounds.

I called Waterco and they helped me get the fitting I needed, and after replacing it, all was well again. I still get a nice pile of debris in the bottom of the filter from the sand and such that blows into the pool, but the stuff that floats cannot be caught by the filter. It's only for sand and such, so I still have to clean the cartridges.

So, for me, it's a welcome addition to the pool and cuts down on the number of times I have to clean the cartridge filter (a lot). It's still as easy to clean out as it was on day 5 or so when I got to try it the first time. It survived being totally filled with fine clay from the flood, and only suffered because I went way past the specs in pressure pumping muddy water around.

Therefore, if the trash you're trying to get rid of is mostly heavy inorganic material, it should do a great job for you. If the trash is mostly light weight, floating organics, you'll get less obvious results.

Mechanically, it's great, just don't expect it to handle flood water that is filled with sand and clay.
Posted by dave at 11:33 AM