Look just before 8PM (20:00); see that bunch of spikes? My peak billing period lasts until 8, and something was sucking power before the period ended ! Let me expand the little piece that shows the problem:

That little period from about 7:24 to 8:00PM was the clothes dryer.

Yes, just a little before the end of my peak period a guest started the dryer to do some clothes. It wasn't their fault, they didn't know that the fascist power company would be watching to see if such a thing happened.

The peaks run as high as 7.4 kW, and it was doing this for a little over a half hour. The APS chart shows it like this: 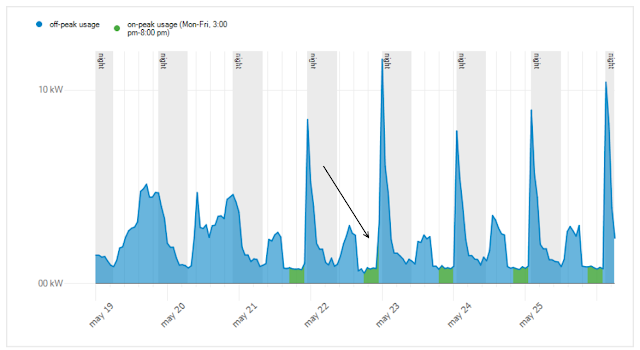 And it was almost impossible to find. I looked for quite a while before I noticed it. I put the arrow on there to show you the tiny little green area that resulted. It shows up a little better on a single day chart: 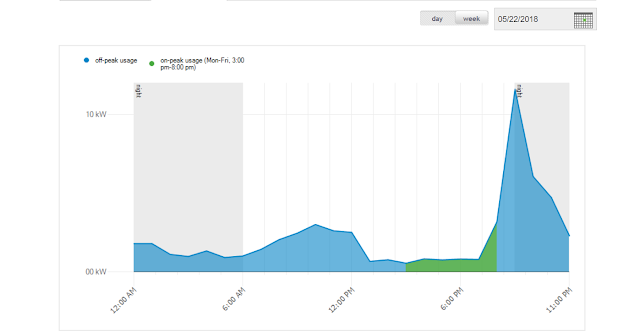 That minor little slope up in the green area is where the meter saw the dryer running. It's recorded as "usage 3.18" during the 7-8PM hour. In theory, this should be my high 'demand' number that is calculated into my bill for the month.

I guess I should do a little calculating to see how this works to help me understand and avoid it even more stringently in the future. Let's look at the detail portion of my bill first: 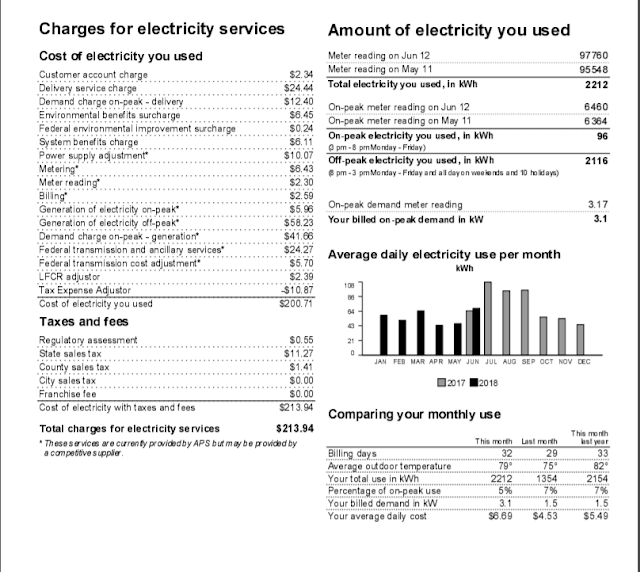 So, the demand number wound up being 3.17 and is used as a multiplier in several items in billing. Here's the rate sheet for the plan I'm on:

So, my 'On-Peak Demand Charge' is 17.438 * 3.17 for $55.28. But, there's nothing on my bill that says that. Guess what? To make it more complicated and harder to understand, they actually split the $17 charge into two components and calculate them separately. From their tarif sheet again:

Or something similar on the bill, and indeed I do. Sort of:

If you look at the bill, you'll see them on there. The sum of the two charges is $54.06 which is darn close to my initial $55.28. The reason for the difference is that APS made a mistake in the original rate change request and has to use the demand number to one significant digit and they can't round, so the actual demand number they get to use in this case is 3.1kW. That's on the bill also, so I don't even have to do the truncation itself:

Your billed on-peak demand in kW 3.1

That's a good thing because rounding would have put me up to 3.2 and would be paying even more.

Now, I got the cost all figured out, the dryer running cost me some amount, but how much extra based on past performance. To get that, I'm going to look at last month to see; taken from last month's bill:

Now is the appropriate time to talk about how APS gets that demand number. As I mentioned in another post, they average each hour and compare it to the maximum hour during the billing cycle. That gives me 5 vulnerable periods each day: 3-4, 4-5, 5-6, 6-7, 7-8. So, the dryer kicked on and sucked power in bursts like all electrical heating appliances and those bursts pulled 7.5 kW for a short period. The bursts were roughly half the time, so it worked out, on average, to the 3.17 kW number that APS measured. It would be too much to read if I did all the calculations, but you see what I mean. That 3.17 was the highest reading so far that month, so it kept it and continued to look for a higher hour; fortunately, it didn't find one, and that's how the month's bill came to be. Next post I'm going into how to read our smart meter so folk can actually see what is coming. Unless one goes to the trouble of doing what I've done, you can't catch it real time and stop it; you can only see the what's already happened.

This is not going to break me, but it does lose me some bragging rights. Because I didn't keep control, I'm out about 28 bucks. Be warned though, if the hot water heater had kicked on, and the stove was running, this would have been a monetary disaster. Thank goodness it was only the clothes dryer and that close to the end of peak !

There you are, an example of how power can get out of control no matter what you do and how much attention you pay to it. Something will slip in and get you from time to time. Overall though, keeping tabs on my power has saved me thousands over the years. This post is also good for folk that don't completely understand how that 'Demand Billing' stuff actually works, and how to tell if you're messing up.

The parts to prevent this from happening to me again are already on order.

Previous post in this series is <link> then next is <nothing yet>
Posted by dave at 4:09 PM