Microwave Trouble: Sometimes a Stupid Question is Just What You Needed

Several times now I've mentioned my microwave oven in passing. It's given me a couple of problems over the years: I managed to explode a coffee cup and the liquid got into the turntable motor, and the entire control board went belly up on me. The turntable motor was easy; I just got a new part and replaced it. The control board was harder, that took a call to GE because I wasn't sure which of the four boards was acting up. I couldn't find a schematic on the darn board to isolate it.

The idea I had was to use the best appliances in the kitchen I could and then not have to ever replace them. The fridge has failed twice; the freezer several times, the range once, the dishwasher four or five. Most of the repairs were done by a real GE repairman using real GE parts except the freezer that had a piece of crap defrost timer in it. So much for the idea of getting top-of-the-line appliances.

But, don't misunderstand, I'm not rich and wasn't rich when I got them. I caught a good sale, the prices were much, much lower then and I had just sold my old house. I was also naive about the actual quality of appliances.

The microwave was working fine with a little fan noise and then the noise got really loud. It still worked, but you couldn't stay in the kitchen with it. Obviously, the bearings in it had failed. Right? Not so, the stupid squirrel cage blower had expanded, rubbed against the fan enclosure and started to get ripped apart. Nice.

Of course, I had to take it apart to find this out. This microwave is a ZSC2001FSS02 and looks like this: 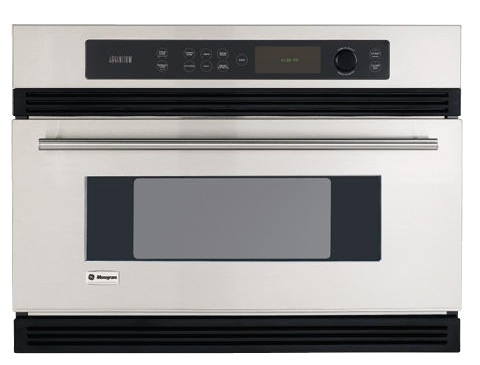 I really like this oven. It's microwave as well as a halogen heated convection oven. It'll do three big baked potatoes in around 15 minutes without waiting for it to heat up. After I got it out of the cabinet and took the lid off to tell what was making all the noise, I looked for the part. No stinking luck; well sort of no luck.

The GE parts web site didn't even list a part number for the blower. It simply wasn't there. Sears listed a part number, but it was shown as "Not Available". Partsdirect showed the number and said the factory didn't supply it anymore. I used the part number and searched for about an hour and couldn't find one. Being a resourceful desert dweller, I went looking for the manufacturer since the name was right on the label, Oh Sung and the part was OBB-2009X1 or maybe m051004.3R. Once again, no luck.

I did find the manufacturer, but I really didn't want to spend a week exchanging emails and then maybe a month getting something from them. So, I went looking for a replacement squirrel cage to put in since the existing motor was working fine. The fan looked like this: 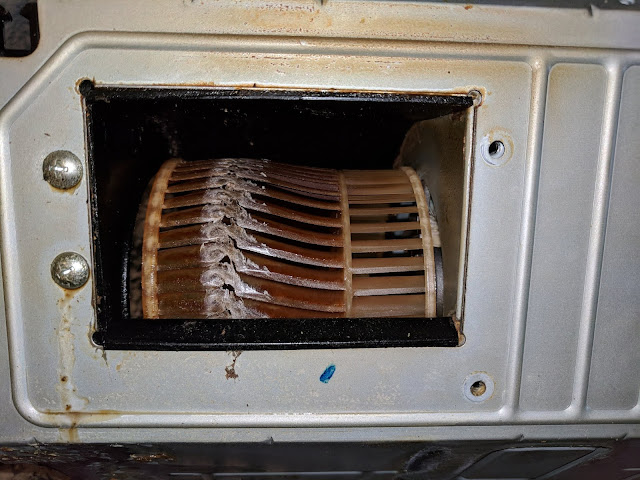 See why it was making noise? Ignore the grease, I didn't bother cleaning it up for the picture. When I pulled the blower assembly apart and looked at the actual squirrel cage, it was worse than I thought: 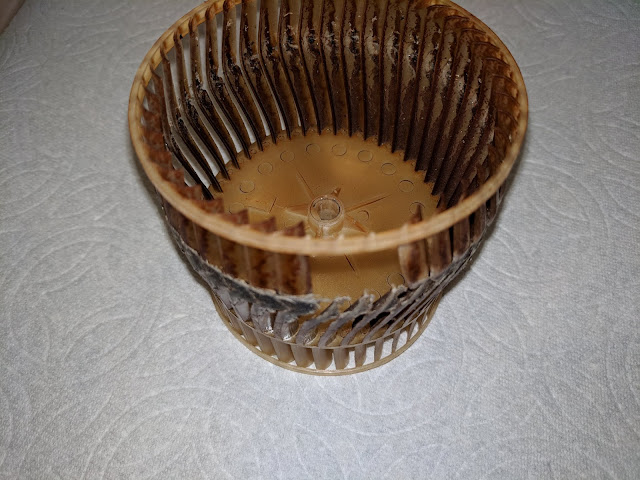 I found the missing pieces inside the blower cover. I had no luck at all finding a replacement for this. The only squirrel cages I found were for HVAC systems and such and they were waaay too large to do me any good.

OK, fine. I'll get something similar from a different microwave and somehow make it work. I switched over to ebay and started looking. There were a a lot of microwave blowers of different styles and sizes. None of them mentioned how big they were, just the various part numbers from the microwaves they were supposed to fit. It was sort of a order-something-to-see-if-it-works kind of thing. I hate that since it could take a long time and cost a lot of money in mistakes.

But, I did it anyway. I ordered a blower from a GE Advantium Microwave Oven that looked similar to the one I had in the squirrel cage construction: 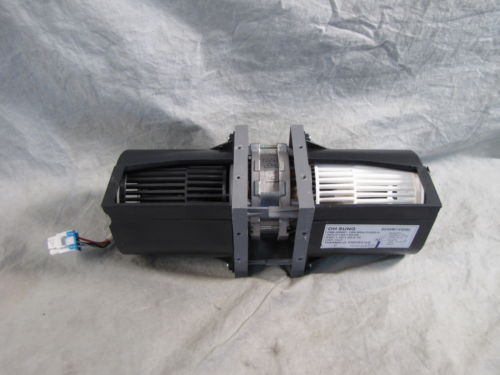 And, that was a mistake. I took it apart and the squirrel cage was the same diameter, but longer and wouldn't fit inside the old housing. The old housing mount wasn't plastic like this one, it was sheet metal: 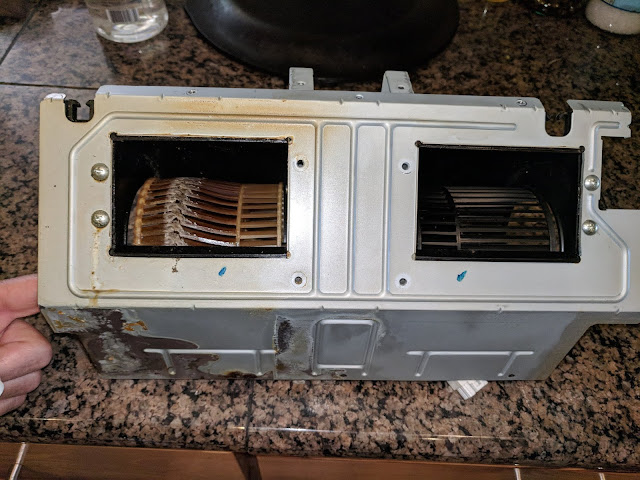 So, I just tried to mount the new(er) housing in the same place: 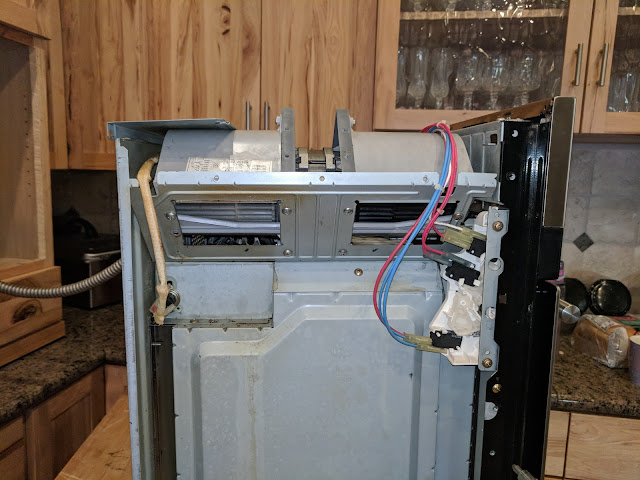 That didn't work out well. See how it protruded above the top of the cabinet? Here look from the side: 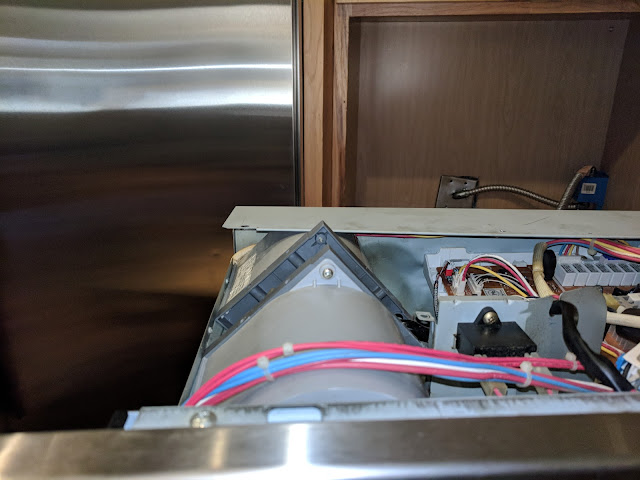 At this point I was ready to cut a hole in the microwave cover and just let it stick through.

About an hour later I had the modification done and now I could mount the new motor to the old metal brackets and put the thing in place except, the new motor was wired differently. The new motor had six wires and the old one had five. I actually hooked it up though to see what would happen (yes, I was that disgusted by then) and the new motor wouldn't start turning. I could get it going by giving it a push, but it wouldn't start on it's own. The start capacitor was wired differently. These motors all have similar wiring, so I should be able to wire it to match ... somehow.

The plug for the motor was one of those that one could remove the pins and rearrange them, but I couldn't figure out how to do it. Yes, I tried the good old paper clip and small screwdriver trick, but the method evaded me. So, I'm sitting there, on the floor, scratching my head and considering just cutting the wires and using some heat shrink and solder to rearrange them when my girlfriend piped up, "This may be a stupid question, but couldn't you just take the rod out of the new motor and put it in the old one?"

Advice to all men, never, ever tell them that they asked a stupid question. The minute I heard it I said, "No, because it's actually part of the armature and it would destroy the armature to try and get the rod ..." I trailed off because I realized that she didn't have a clue that the shaft was integral to the armature, and she really meant to switch the armature. Crap, why didn't I think of that. 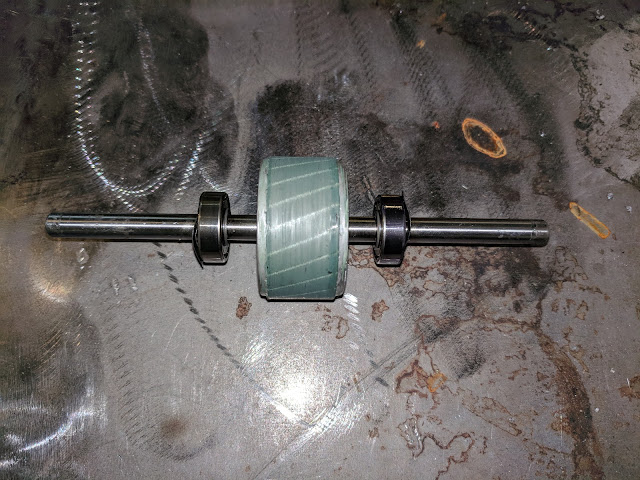 I took the motors both apart; switched the armatures; installed the old housing (with the fan holes modified); the old motor and its correct wiring and newly installed armature with longer ends and it worked like a charm. These motors are mass produced for various companies around the world. The windings in the stator are sometimes different to get two or more speeds, but you can choose to use only one speed if you want. The armatures are all the same and you can move them around as needed. In this case, I needed the longer shaft on the armature combined with the windings from the old stator to match the wiring in the microwave. Really glad she was over watching me flail around.

Never ever tell a woman that she had a stupid idea. Her simple suggestion was exactly the thing I needed to get this to work.

I'm on the watch out for a truly suitable replacement, but don't have the pressure of a dead microwave hanging over me. I may contact the manufacturer for help in sourcing parts to see if I can get any help there. They may even have metal squirrel cages for these, and that would eliminate the problem forever. Failing that, I may go to an appliance store and prowl through their supplies to see what I can turn up. Or a junk yard.

And, what did I learn from this experience?

Email ThisBlogThis!Share to TwitterShare to FacebookShare to Pinterest
Labels: Appliances, Around the House, Microwave