This isn't a complaint session about Amazon, they've done well by me <link> several times, nor am I going to complain about Chinese products; a lot of the posts on this blog are about those items. This is just the story about a single product that I thought my readers would enjoy.

I needed a 240VAC to 110VAC transformer to provide power for my latest project, increased monitoring of my solar water heater. The 45 watt pump that moves fluid from the rooftop collector actually measured 68 watts when I plugged it into a Kill-a-watt to measure it. I know how this stuff goes, so I figured I'd probably need a 200 watt transformer because they always over rate these things in the specs, and I should probably stay below 50% of rating to get good service.

Have you checked out the prices on those things? A simple 2 to 1 transformer can cost as much as one can pay. The prices I found started around $37 and went up indefinitely from there. I know these things exist and shouldn't cost as much as some televisions, so I looked for another solution. I thought I found it and ordered one of these: 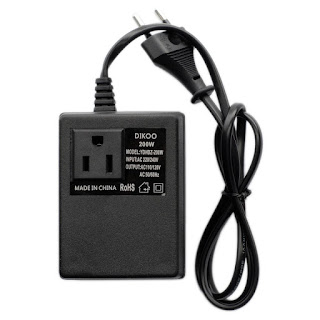 It's a 220 to 110 transformer rated at 200 watts for converting power for US travelers abroad. The images on Amazon showed the interior and it is a simple transformer with no other supporting circuitry to worry about. This should be perfect and only costs $16. That's less than half the price I found for the transformer inside.

It came in today and I rushed to unwrap it --- it rattled. There was something broken inside that sounded like a piece of plastic. But first, here's a picture of what I received: 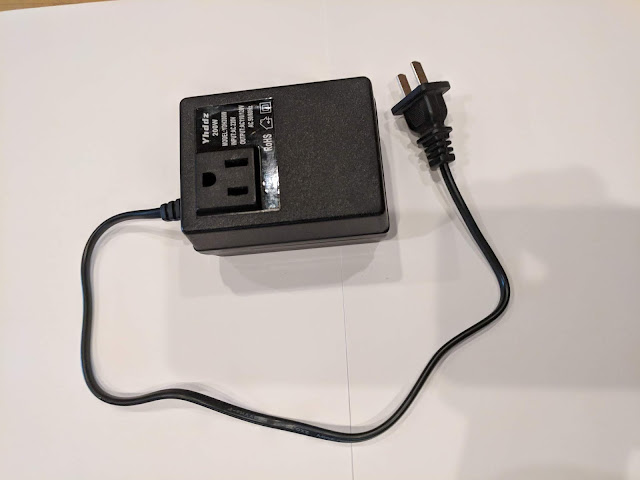 First, notice the plug. It's a normal non-polarized US plug, not the European round pin plug shown on the Amazon page. Why would they put a US plug on something that was designed to be used outside the US?

Since I was going to dismantle it anyway, I took it apart. 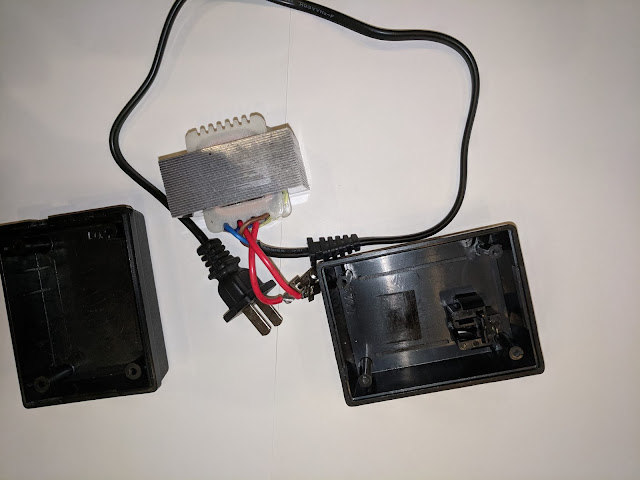 There was the transformer I needed, but what had happened was that the transformer had come loose from the case, banged into the molded socket and broken one of the plastic pieces. The transformer was supposed to be mounted with some of that high strength two sided tape. I've used this tape several times and it really works great; why did it fail? Well, here's a shot of the tape: 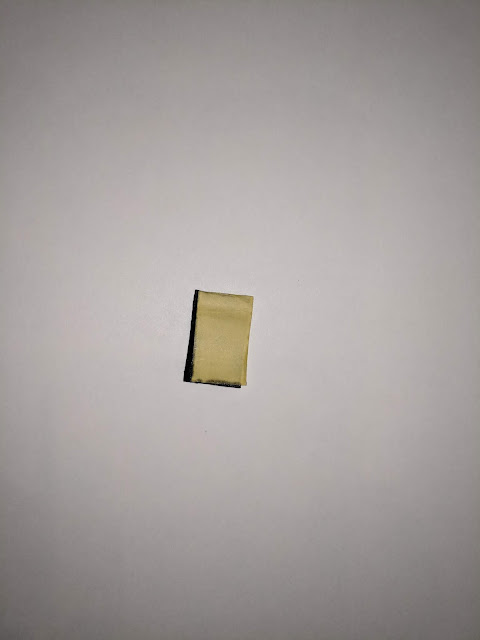 Don't see it? They didn't remove the paper from one side of the tape. Like all two sided tape rolls, there is a piece of paper on one side of the tape. You cut off a piece, stick it to whatever you're attaching, then peel the piece of paper off and adhere the tape where you want it. This simple technique holds lots of things in our everyday life in place. The decorative molding on your car is probably held on this way, and you drive it at speed down the road every day. This stuff is good, if you actually remember to take the paper off.

What happened is that Amazon took the converter off the shelf in its box, shoved it into a padded envelope and shipped it to me. One of the conveyor belts somewhere dropped the envelope a little ways, the  loose transformer banged against the molded socket and broke it. That was how my rattle came to be.

If I wasn't going to only use the transformer, I would have returned it for another one. But the part I needed came through the ordeal unscathed. Unfortunately, there are no numbers on the transformer at all. No manufacturer, no nothing that can help me trace it to buy another. Maybe someone reading this will have some idea where I can source another when I need it.

So, even though the plug is dumb, it arrived broken and would have been intrinsically unsafe in use, it fits my needs perfectly. I saved at least $15 buying this instead of a transformer from a regular supplier.

Email ThisBlogThis!Share to TwitterShare to FacebookShare to Pinterest
Labels: Around the House, Hot Water Heater