If you've read a few of my posts, you know I have a few problems with critters out here. I love sitting on the patio watching the quail sneak around the yard trying not to attract the attention of my dog. The rabbits get in the fine sand and roll around playing leapfrog... Really, they actually play leapfrog. They take turns jumping over one another and roll around the the sand kicking it as far as they can. The lizards watch while doing the push-up thing they do.

And then it all comes to an end when a Harris Hawk flies over looking for breakfast. All the critters head for cover, and it can be thirty minutes before they venture out again for play.

There are only a few destructive animals that I don't get along with. Woodpeckers I've already complained about on this blog <link>, but now I want to talk about rats, mice and small ground squirrels. These rodents build nests inside the engine compartment of my SUV and proceed to eat the wiring. They eat the swimming pool wiring, steal anything shiny, and believe it or not, move the dog poop around.

Gross right? They move into a new home behind an outside cabinet and then get some cactus and dog poop to protect the entrance. The reason for the cactus is obvious, simple protection. They move the poop into the entrance to disguise the smell. Hoping that no other animal will realize there's a rats nest in there. Of course the snakes are wise to this and go behind every cabinet. Makes for some interesting times.

Up until the last month I've had this under control. I use Terminix for pest control because I don't want to have to worry about storing poisons, and for 10 years now they kept the rodents under control with poison. Yes, poison. They have a carefully designed enclosure that only lets the small animals in and the poison is inside a chamber at the back of it. The poison is in large pellets with a hole in the middle, and then it is threaded on a wire so it can't be removed. It's a clever design that contains the poison while allowing access to small destructive pests. The nice thing about the poisons is that, after they eat it, they go into a hole and die; they don't lie around the yard.

Yes, there are concerns about 'secondary poisoning,' but that doesn't happen very often. In fact everyone out here uses poison and no one has ever had it happen. Secondary poisoning is where the rat eats the poison and then the pet dog eats the rat and gets poisoned. I haven't heard of it happening, so I called my vet. He hadn't ever had a case of this, but it was a possibility. He said an average dog would have to eat a pile of rats to get enough to cause a problem.  Basic chemistry, 40 pound dog, 10 ounce rat; big difference.

Caveat though! The rat poison Bromethalin is dangerous. The problem with it is that there is no test for its presence and no treatment for exposure. This nasty stuff is a neurotoxin and just flat dangerous. I never let this stuff anywhere near my place. The old fashion anti-coagulants are fine since there are treatments and tests that the vet can do.

Here's one type of enclosure they put out: 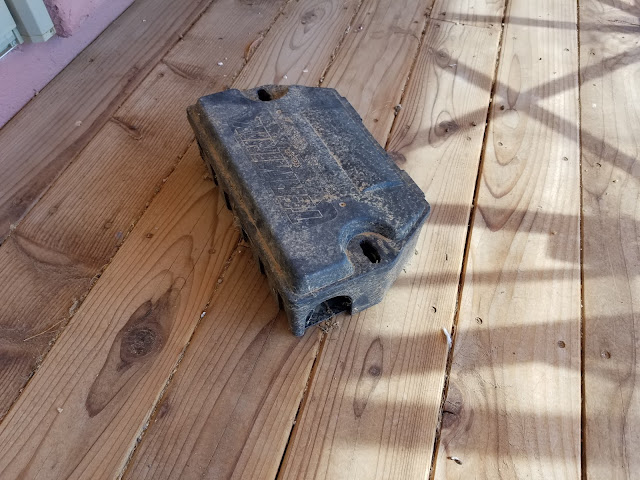 Notice the hole on the side? There's one just like it on the other side as well. I put these up against the house, barn, swimming pool fence, etc and the rodents run through it going from place to place. They eat the bait, and my problem is solved for that particular rodent. Here's an inside view: 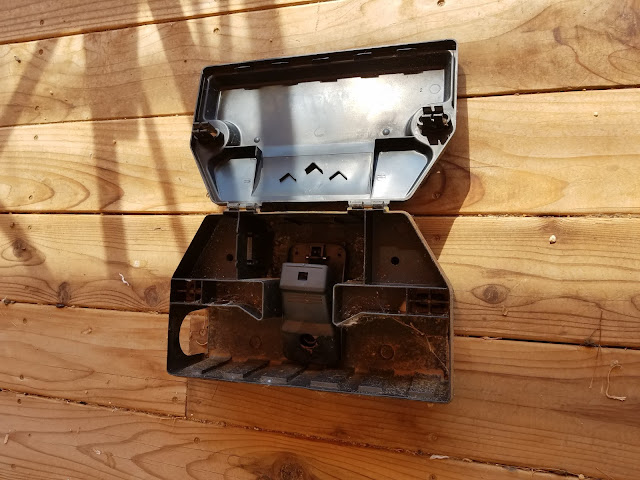 This one has the trap inside instead of the bait.

Anyway, this method has worked well for me for years now. NO MORE. Terminix decided that they aren't going to use poison anymore and put out traps. I objected, but decided to give it a try.

What happens is that the rat goes into the enclosure to get the bait, the trap springs and kills the rat. Now in about an hour the rat swells up and starts to stink. Remember, the trap is inside a black enclosure and the heat accelerates decomposition quite a bit. The stink attracts the ravens which crowd around the enclosure trying to get to the dead rat for lunch. Of course my dog absolutely has to chase the giant crows away barking his head off the entire time. He gets tired and leaves then back come the ravens. This gets the attention of a wandering coyote who sees a chance to grab a big crow and it starts looking for a way into the yard. The dog notices the coyote and goes out to protect his yard and gets snapped at by the coyote. I've already lost one pet to coyotes so I have to go out and scare the coyote away. Usually I just scream at it and it takes off, but the last week they've gotten bolder so I shoot a .22 into the ground to get it to leave.

Don't think for minute that, if I got a clear shot, I wouldn't kill the coyote. I hate those animals. But I don't get a safe line on the coyotes with my dog and a bunch of ravens milling around. Yes, it sometimes results in a call from the neighbors, but they've gotten used to me over the years.

I finally get all the different animals dealt with and have to attend to the dead rat. I open the enclosure and take the rat out, get the water hose and rinse out the blood and maggots, rebait and reset the trap. The rat goes in the bin inside a plastic bag to contain the smell. The ants and such take care of the debris that I rinse out of the trap. It's quite a messy procedure and takes about thirty minutes or so not counting the shower afterwards.

Last week a turkey vulture was circling my house. I had been lazy and left a rat in the trap over night. The stupid vulture stayed around all day driving the rabbits and quail under the bushes and any place else they could hide. It went away finally and things returned to normal. All in all, the trap experiment was a bust. It's just too much aggravation and time.

Just how many rodents do I have around here? This is from a poultry site <link> and can be used as a really rough guide to the level of the problem:


The presence of rats and mice is not always obvious. However, one rule of thumb for the estimation of rat populations is as follows:
The frequency of catching rodents in traps may also be used to assess the level of infestation.
According to this I have between 500 - 1000 rats to deal with.

I called Terminix and they said they would have the local service manager contact me. About an hour later he did, but there was no satisfaction there. I'm extremely polite when I do this kind of thing. I try to 'nice' my way into getting what I want because yelling and anger just doesn't work. However, the service manager works by different rules.

"I will never allow poison to be used on your property." is a direct quote. Another one is, "Are you licensed to spray pesticide?"

My answer was simple, "No, that's what I hire you for." I didn't see any relationship between being licensed for commercial application of insecticide and rats, but when people get excited they tend to wander.

I thanked him for his time and told him I was going to call his corporate headquarters to hear directly that this is their new policy. I wished him a good day before hanging up. See how I do this; 'nice' them to death.

About six minutes later, when I got hold of a rep in corporate, they already had an email telling all about the conversation from his point of view. It didn't match mine, but this isn't a court of law, it's just a customer complaint. The rep at corporate told me that it was truly their policy to not use rodenticide any more, and they had moved to kill traps instead. I pointed out that I had essentially an infinite supply of rodents and that just wasn't going to work out. Their solution to my problems disposing of the rodents was to simply call the technician out and have him take care of it.

Think about that a minute. I have a dead rat in a trap and call them. They schedule an appointment for two days from now and I have to put up with all the above for two days before he comes out. It wouldn't be too long before the tech would be too 'busy' to get to me, and I'd have to wait longer, or take care of it myself like I've done for the last month. Keep in mind that there are literally hundreds of rodents. Not acceptable.

Also, an unexpected problem came up. The rats figured out how to break the trap. They simply go around the back and chew away the trip mechanism which releases the trap and they get the bait. I was actually surprised at this; the average rat intelligence must be going up in this area. Here's the trap: 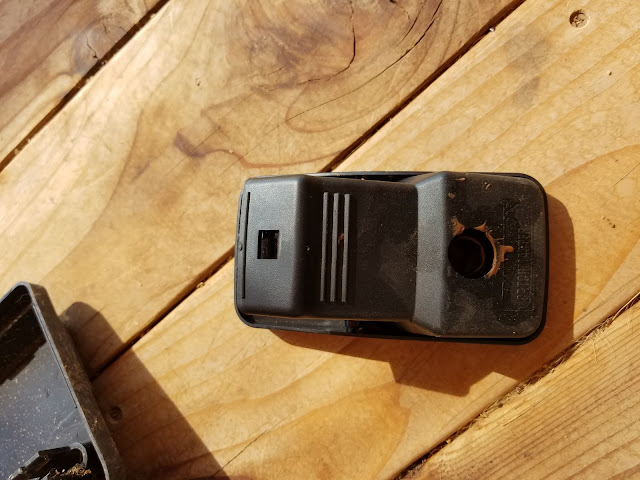 And here's shot of the back of it: 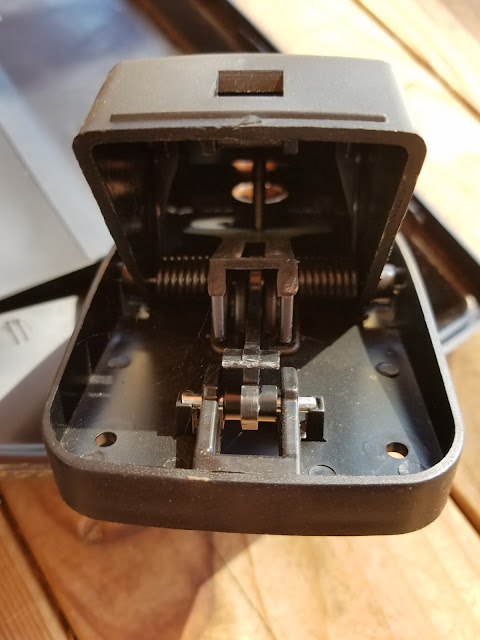 Look closely, there's teeth marks on the trip mechanism where the rat disabled the trap. This trap is fodder for the garbage can unless I want to use it as a clip somewhere.

Currently, there is no solution. I'm waiting for a call from their regional manager to discuss it. We all know what will happen. I'll simply not pay the bill and let the service lapse while finding some other company to take care of spraying for insects. I think I'll just use their bait enclosures and buy my own poisons. That way I can use what I want and not adhere to guidelines that some company has put in place.

It's a shame though. I've used the same company in two states and different houses over almost thirty years and some manager somewhere institutes a policy to avoid a problem I simply don't have and haven't seen. Thus, creating a whole bunch of problems for customers like me. Typical short sighted management that doesn't allow for enough situations.

Bet I wind up saving money though.