The previous post on this project is here <link>

Yes, I've made some progress on this project, but first let me talk about why I'm bothering with this. A couple of folk have asked me why I hack into these devices in general; the answer is not an esoteric, "Because they're there." I enjoy the challenge, but mostly it's because I want to use them without a bunch of strings attached.

The Iris devices are fairly priced, but not if you have to subscribe to a service that cost $10+ a month for the rest of time. From dismantling them I can tell the construction is actually pretty well done even though I keep seeing complaints on the web about how they should be smaller, prettier or come in colors. I couldn't build one as nice for the price. Actually, I couldn't build one as nice for twice the price. The single disadvantage is that their usefulness is tied to a web site that is run by a corporation that can change their mind at any time about anything and leave me hanging. Been there, done that, want to avoid it in the future.

Enough philosophy, I'm going to talk about the Iris Key Fob a bit. When I got some reaction from the door switch, I wondered if the key fob would work in a similar way, so since I was going to town anyway, I stopped off at Lowe's and picked up another door switch (I have two now) and a key fob as well.

Edit: I originally forgot to put up a picture it the Key Fob assembled, here it is: 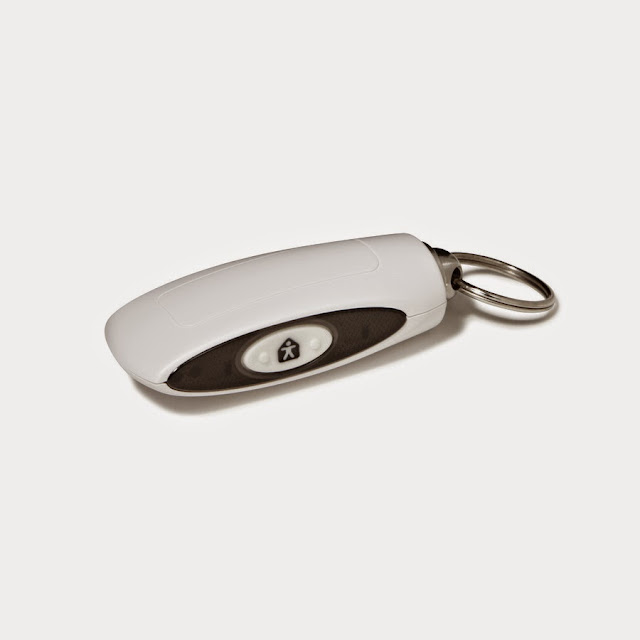 Here it is with the cover off. 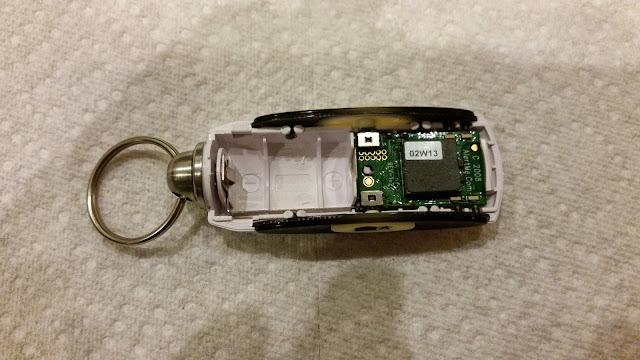 Same good construction as the door switch with a pair of switches that you press to activate funtions remotely. Let's pull it apart. 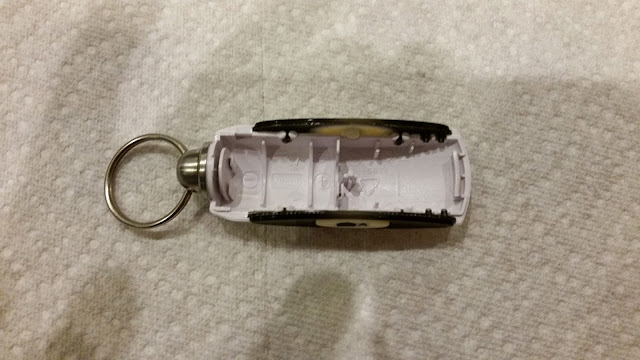 This is the case with the board removed to show how the plastic that operates the buttons is done. This makes for a nice feel when you're pushing the switch. The only problem I saw is that it's easy to press both switches if you squeeze it. A little care can overcome that problem though. Here's one side of the board, 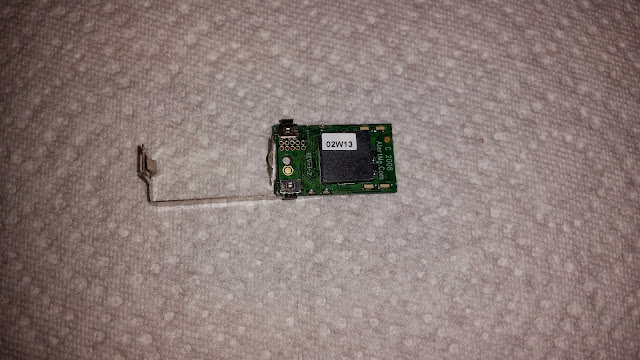 and this is the other 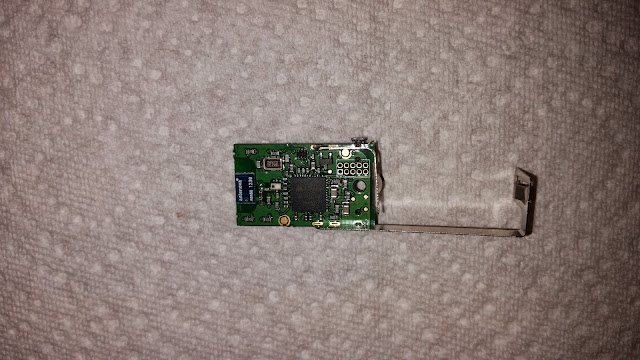 You can click on the picture and zoom in if you want.

The switches have tactile feedback so you know you pressed it and the battery seats firmly so you know it's in there. Nice switch, albeit a bit large for some people's taste.

This switch was designed to control the Iris system in a home. If you push one button, it arms the alarm, and the other switch disarms it. It also provides feedback to the system that the fob is in range. People describe it as the Iris Hub sends messages to the fob every two minutes and if it doesn't get a response, the hub arms the alarm. My reading of the messages that fly back and forth shows that the fob reports every two minutes to the hub, so that would mean two minutes without a message and the hub will arm itself. There may be something I'm missing, but I'll turn it up eventually.

I see this device as two remote control switches that I can do any darn thing I want with. It could be on and off for a machine, light, ceiling fan, whatever I want. I can have one in each room attached to the bed for ceiling lights, or turn off the smoker in the yard if I want to.

I can hear my readers saying, "Fine, nice pictures and philosophy; tell us how the interaction works and give us some code." Well, I'm going to make you wait a couple of days before I bury you in code because this gets somewhat complicated and I'm not sure I've got enough bugs out to trust it yet. I have two door switches, a key fob and five smart switches running on the same XBee controller quite reliably, but a reader who 'volunteered' to try the code also has had nothing but problems.

Where my stuff joins and just works, his decided to get flaky and mess with his mind. We're trading logs and code back and forth to try and figure out what's different.

More later, but you got a look at the internals of a device, so stop complaining.

The next post on this project is here <link>
Posted by dave at 3:15 PM