Yes, I have a guest speaker for this post. Glenn lives in the part of Texas where they got about a ton (per square inch) of rain recently. Since he couldn't play outside, he decided to play inside with ... yes, a sprinkler system. I asked him to write about it because it is a novel and really, really cool setup. It uses those valves that latch into place and take zero current to run saving power and allowing for the possibility of battery operation. I'll shut up now and let Glenn take over:

Lately I have been working on my baler between rain storms. However, during the rain storms I have continued to work on my vineyard irrigation controller. Not that the grapes are going to need watering any time soon. But there will come a time and I must get this moved forward.

I have a large aluminum panel mounted to my steel pipe fence with a water hydrant next to it. I have my three zones of irrigation pipes running up to this panel (just underneath it). I have purchased a three zone manifold valve system from Orbit and equipped it with two 24VDC solenoids. The black object on top of the green valves is the solenoid. The 24VAC ones have two black wires. The 24VDC solenoids have one red and one black wire. The red goes to the set screw terminal and the black goes to the reset terminal of the zone. This is a really easy thing to do. The manifold will be mounted on the lower left of the panel just above the zone pipes. There is no need for me to put these in the ground as it is more of an industrial installation. The aluminum panel faces north so nothing will get direct sunlight, which here in East Texas is intense. Currently the aluminium panel has just a water filter mounted on it. I welded Unistrut ( this is the funny C channel electricians use) to the pipe fence then bolted the panel to the Unistrut. It makes taking the whole panel off really easy should it be necessary. 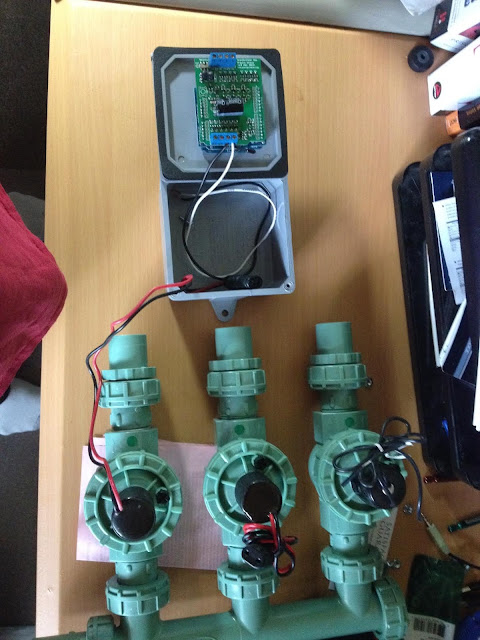 Back to the controller. Just above the valves I will be mounting a 4X4X2 inch plastic electrical box. I got this box from Home Depot. I comes with a waterproof cover and mounting tabs on each side. This is a shot of it open with the cover reattached backwards. 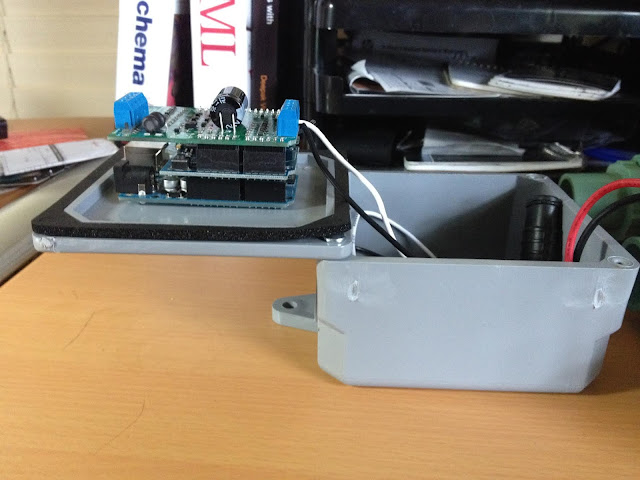 As you can see from the above photo I will be mounting my ardweeny and support shields to the cover of the box, not inside the box. There will be one or two access holes in the bottom with water tight entry fittings through which the wires will got to the valves as shown in the first picture. There will be three shields to the system. Ardweeny, XBee and Valve controller, all stacked as shown.

The really key thing here is that everything will mount to the cover, not inside the box.
I have several reasons for this. All fall under the category of convenience.
When I open the box and reverse the cover as shown, everything is readily available. I can access the usb port without problem. I can remove any or all of the boards conveniently. I can work with the enclosed wiring without having the shields also in the box getting in the way.
If I need to I can remove the entire controller just by disconnecting a few wires and take it away. The entire box stays mounted in place. Oh and by the way, since there are no screws on the back the box will site flat on the surface of the aluminium plate.

The box cover will also have a key pad mounted on the front for manually turning the irrigation zones off and on: 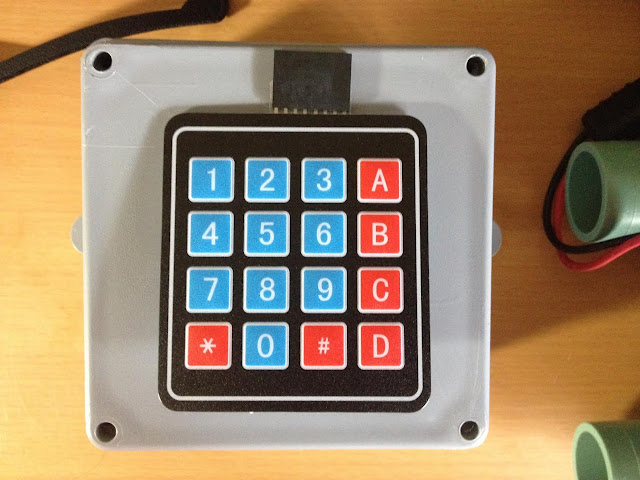 The Orbit manifold I purchased from Lowe's. They usually have them in stock. They come with everything you need including 24V AC solenoids. I think I paid $54.00 for it. I bought two 24V DC solenoids off Amazon that were "used" actually only the packaging was used for $7.00 each. The third I will buy from Lowe's locally as they are in stock and only cost about $10.00. They simply unscrew. My 24V DC solenoids came with a little gray adapter that has to be removed and then screw it into the manifold. I can take some pix and send them if you like to describe it.

Rain protection. None required. This stuff is meant to be in the ground. It gets wet. Everything will be mounted on a vertical plate of aluminium. If one wanted you could simply add a little roof shelter at the top of the aluminium, but I do not plan to. The 4X4X2 box is water tight. The connections coming in from the bottom mean rain can't enter unless it rains uphill.
I mentioned water proof connectors on the bottom will also prevent wasps, and other critters from getting at the circuitry.
I may put a little roof cover above the keypad like they do for gate openers that you drive up to. I will seal any entry points such as the keyboard cable entry with silicon sealant.

I plan on powering this with either a 9volt battery or a combination of 9volt and three AA's. This way I won't need to have a regulator. I plan on having it shut down through software much the same way as your remote temperature sensor works. The jury is still out just yet on this. I plan to liberally and unashamedly steel Dave's software......Hee Hee Hee. He's done a great job and created a voluminous library of functions that will save me from reinventing the wheel.

I chose to go with Ardweeny because there is a nice little shield for it that fits the Arduino form factor. I can do all my testing and code development with the regular Arduino and then simply replace it with the programmed Ardweeny. No other special mouning requirements. I have the shield on order and as soon as it arrives I can drill the holes.

I plan on a next issue of this showing how I will use insert nuts that have a built in standoff of about a 1/4 of an inch to mount the Ardweeny shield to the cover and gluing up of the finished numeric pad. There will also be more discussion on powering. I am thinking of a second box that could house a small motorcycle battery. I found one for $25.00. The big thing on this to remember is that this only will run through the summer months so I could conceivably charge the motorcycle battery once a year and run it all summer. More to come on this note.

Still a few things to think about with this yet. I'm not sure about a led in the outside of the cover plate that will illuminate when you push the button. I'm thinking that the clicking sound of the solenoid plus the rush sound of the water in the pipes might just be enough. Needs to pass the "wife" test though.

So there you have it. The main theme of the blog is really "Don't forget the cover" and the benefits it affords for mounting options.

This is Dave again, I have a comment, AWESOME. I've been using those waterproof boxes from Home Depot for quite a while for various projects and it never, ever occurred to me to mount everything to the lid <link>. Simple idea that I should have thought of.

Yes, I'll be stealing that idea and others from him.
Posted by dave at 7:27 PM

Email ThisBlogThis!Share to TwitterShare to FacebookShare to Pinterest
Labels: Arduino, Around the House, XBee