Have You Ever Thought About Tire Inflation?

Well, neither had I. At least not much more than topping of a tire once in a while. However, I got new rear tires on my big tractor and after a while of just sitting, one of the tires was very low. Getting the new tires was an interesting experience. Those things weight a lot and I didn't want to spend hours trying to break the bead and leverage the tire off using long tire irons, so I just called in a mobile tire service and let them do it for me.

They came out in a big truck with a crane installed in the middle of it. They didn't even have to remove the wheels from the tractor; they simply pulled the tires off of it and put the new ones on. I sat in a lawn chair and watched. That's the 21st century way to get tractor tires changed. 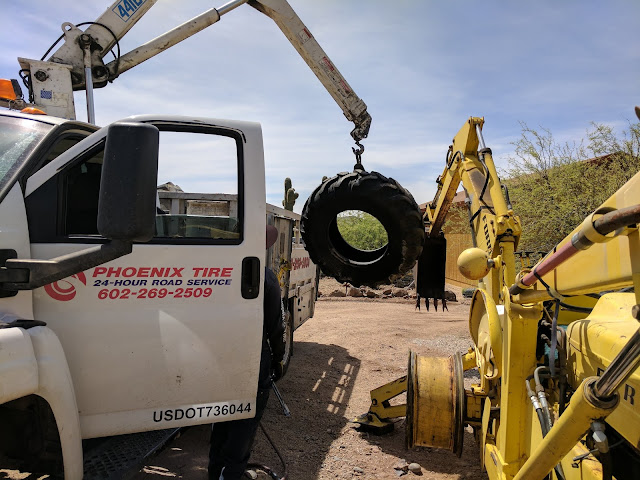 Anyway, the brand new tire was flat and I had to air it up. I grabbed my trusty tire inflator and about ten minutes later I was still messing with it. I have a pretty good compressor, but putting air in a tire as big as the ones on my tractor through a hole a little more than an eighth of an inch was going to take some time. Plus, holding it up to the valve stem was getting tiring. You all must have either owned or used one of these over the years:

I had another one to try out that I picked up at Tractor Supply a few months back, so I gave it a try and it didn't work much better.

The little assembly that was supposed to hold the hose on the valve either leaked or popped off each time I tried to use it.  I did eventually get it to fill the tire, but it was an experience that I didn't want to repeat.

Off to Amazon I went and found an inflator that had many good reviews and looked like it could do the job because it was substantially better made than the one I had. There were rave reviews that indicated that it would tell me the tire pressure as I filled the tire, it filled fast, was accurate, all the hype one should have learned to expect and disregard. I ordered it. When it came in, I drove the tractor (with a flat naturally) in front of the garage and tried the new device out.

Although the clip on part that should hold it to the tire worked better, it leaked if moved even a little bit in any direction. Since the valve stem was on the inside of the wheel that meant I had to lean over the tire and hold it in place. All was not lost though, it had a screw on fitting that could actually be put on the valve and would allow me to relax a little bit while filling the tire. But I couldn't figure out how to hook it to the inflator hose.

I used this inflator to fill the tire, but it wasn't a very satisfactory experience since, even though the clip on was better, I still had to make sure it stayed straight on the tire. 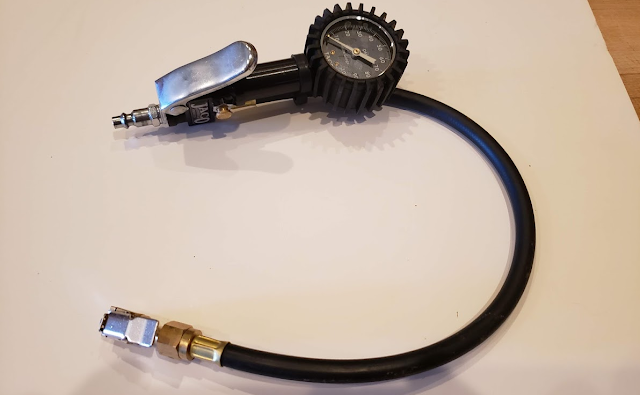 I went looking for another one based on about $40 spent so far and several hours direct experience and ordered this one. 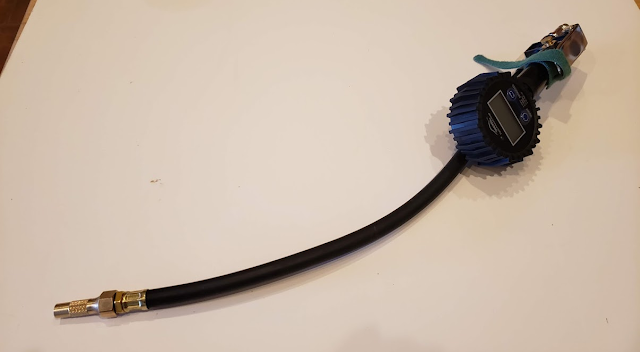 It had exactly the same valve assembly as the last one with exactly the same screw on adapter, but this one had a hose that I could use the screw on with. I installed the 'hands free' adapter and hooked it up. No leaks and I didn't have to hold the hose totally straight to use it. The problem with this one was the same as all the others I had to lean over the tire to hold the stupid lever that released the air.

Fishing around my drawers of junk I found a piece of velcro (you can see it above) that I could wrap around the valve to hold it open so the tire would fill unattended. I was totally set up now. I could attach the fitting, fill the tire while checking fluids and such, then put everything away for later. Of course the eventual goal was to get the leak fixed, but I hadn't been able to find where it was.

I did notice a few things I want to share about these simple devices that don't work as well as they should. First, these days it's actually getting harder to find inflators that aren't digital. They all tout how wonderful they are because they are 'easy to read'. That is a simple lie not only will the batteries be dead when you need it, you can only see the numbers when they are oriented correctly. And, who the heck cares about a half pound resolution in a tire's pressure? As soon as you disconnect the device and the air warms up a bit whatever reading you had will change. My bet is that the accuracy is around ten percent or so and a digital reading just isn't necessary. It will also save you time, money and frustration with an old fashioned analog gauge.

None of them read the pressure of the tire, they all read the hose pressure. Think about it, it's a hose transferring air, the only pressure it actually can read is the pressure in the hose. That's neither the compressor pressure nor the tire pressure. This all means that you have to stop the flow of air to actually get a reading. I checked it every couple minutes (yes minutes) to see how it was going. Usually, I over inflated it and had to drop it down to the right pressure by hand, but that didn't take too long.

The high end devices cost from $25 up to over a hundred and they're all basically the exact same device with different names stuck on the outside. Take a look: 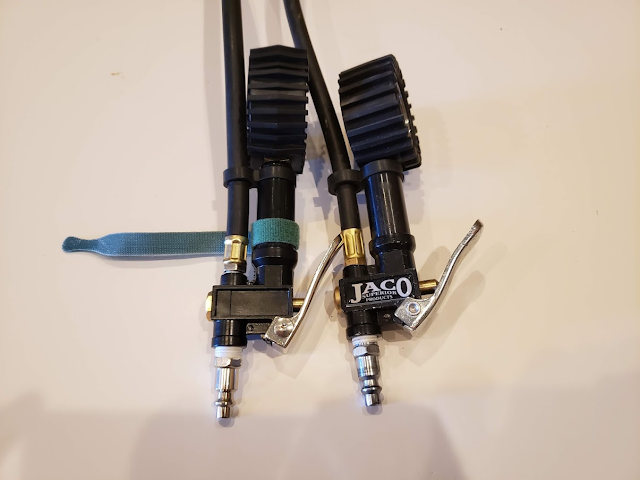 Lastly, don't believe the comments and advertising. If you have big tanks or tires to fill, get a screw on adapter and use it. It won't speed things up much, but you won't be holding the hose a certain way to keep it working while having to hold the lever down.

Heck, the first inflator I tried that had been my buddy for years and years would have worked with the adapter and I would have saved roughly fifty bucks and weeks of frustration.

Oh, I finally did find the leak. After washing the tire down six times with soapy water and turning it slowly in the sun and finding nothing, I was under the tractor working on a simple drain valve and happened to think that I hadn't checked the valve on the tire. The valves on the tractor are all on the inside to prevent rocks from ripping them off and they are a bit hard to check. Sure enough, the valve was not tight in the wheel and leaked. A few minutes with some soapy water and a wrench and the problem was fixed.