I have a 2002 Jeep Wrangler that is  my everyday car. Living where I live I occasionally actually need the 4x4 and the winch I put on it has helped several people out of mud holes; nice vehicle. The other day my dash check engine light came on and when I glanced at the gauges, the oil pressure was maxed out.

I've seen this before on other vehicles, and wasn't too worried; if it had gone the other way, I would have pulled off the road and checked it out. So, when I got to the WalMart down the road to pick up some stuff, I killed the engine and then turned the key on without starting it. Yep, I had 80 pounds of oil pressure without starting the engine. Needed a new sensor.

Stopped off at O'Reilly's and got one, then went home. I decided to put it in later when the engine was cold, I had other things I wanted to do besides burn myself on the exhaust pipe replacing a sensor.

A couple of days later I went out with my morning coffee, a dog, and intentions of knocking this repair off in about thirty minutes. An hour later, I still hadn't managed to get the dog gone plug off the sensor.  Yes, I read the articles on the web, and looked a videos and such, but they didn't help a bit; the stupid plug was still on there. The sensor was near the passenger side firewall about a yard away and I could barely reach it cramming my arm down among all the wires and such with the release for the plug on the wrong side where I couldn't see it and get a screw driver in for leverage. Take a look: 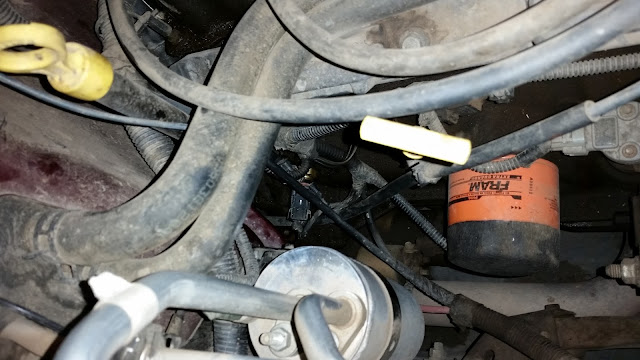 Can't see it? Neither could I at first. It's that brass looking sliver thing in the middle of the picture way down inside. Click on the picture then enlarge and you'll see it. No, I couldn't get to it from the bottom; there was exhaust pipes and suspension in the way and I couldn't get my arm in there.

I was pretty disgusted by this time so I went Medieval on it. I grabbed a steel bar, a hammer and busted the plastic top off the sensor. Now, I pulled the wire up and disconnect the plug from the broken piece. I was on my way and had the job done in about fifteen minutes.

Moral, when all else fails, get the hammer.

This is all introduction to what I really wanted to show you; all folk like us have had problems like this where something is at the end of our reach and everything conspires to keep us from doing it. Just get a hammer.

What I wanted to show you was the circuitry I found: 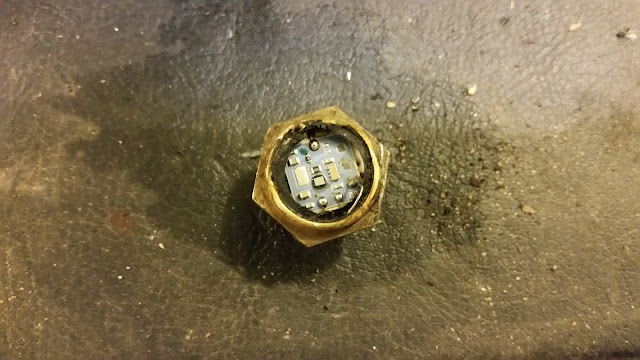 Yes, inside the sensor sealed in brass and plastic is a circuit board. I couldn't find any numbers inside to tell me about the circuitry, but it was reasonably sophisticated. No wonder the thing cost me $48; this is a cool device.

It made me wonder about some of the other sensors the car has. The throttle position sensor is a simple potentiometer; I've already taken one of them apart. I'm going to dismantle the others as they fail and get replaced, it may make this kind of job more fun.

Yes, I know that I have other things to do. I'm getting to the conversion to mqtt as I have the time, but converting the various devices to use JSON strings and such is a drudge since I've done that before, but I'll get to it ... promise. But I've got that new tractor and some holes to dig before the end of August when the real rains come.