Arduino, XBee, and a Freezer Defroster

I have an upright freezer.  Living a ways from town and the climate make this necessary.  I load a cooler in the car, go to the store get my frozen goods and some ice, pack the food in the cooler with the ice and come home.  When it's over 114F outside, you have to take some special precautions to keep the food from becoming a puddle in the back of the car.

A while back I discusssed how my freezer uses power; it's relatively efficient except for one item, the defroster <link>.  A freezer's defroster is a combination of a timer, a heater, and a thermostat to monitor the temperature of the evaporator.  What bothered me was the timing of the defrost cycle.  Every 11 hours or so, it would defrost, and this meant that the heater would be on during peak usage period.  Since I pay a lot for peak usage it would be nice to have better control of the timing of the defrost cycle.  So, an examination of the defrost circuitry showed a clear opportunity for an accurate timer and a simple SPDT relay as a replacement for the conventional method.

So, since I had a couple of arduinos that weren't doing anything, I got one of these: 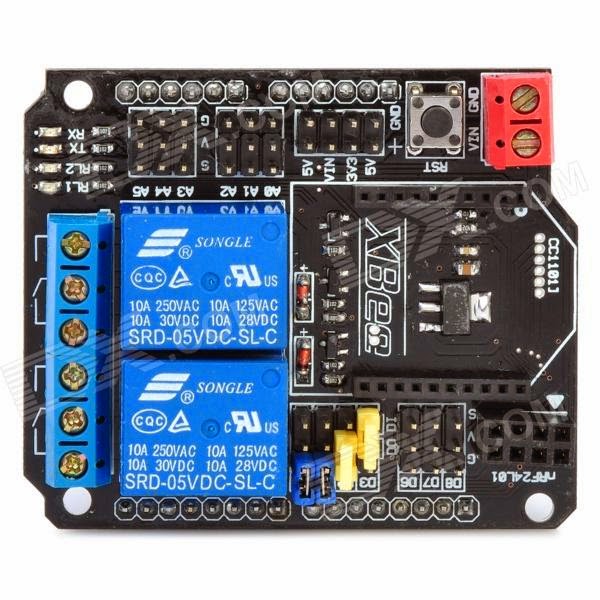 This shield has both the relays and the XBee socket I wanted to use, perfect.  I have a few XBees that I picked up, so I configured one and plugged it in.  A little code later I was reading my house clock transmissions and setting off a timer every 12 hours.  I chose 08:15 and 20:15, times that are outside the peak period, now all I had to do was wire it in and test it.  Here's an image of the schematic of the circuitry: I circled the defrost timer to make it obvious.  Notice that it simply switches between the compressor circuitry and the defrost heating assembly.  This makes it simple to wire into the circuitry, so I took out the timer and used the plug that went to it to wire into the relay of the arduino shield.  It was ready to test, and I hooked up a wall wart power supply and plugged the arduino into the same power monitor that I use on the freezer.  It worked like a charm.  Now my freezer goes into a defrost cycle at the programmed times and runs for 30 minutes.  I checked the evaporator pretty often to make sure it was running the heater long enough and everything seems fine.

While I was programming the device I threw in some code to allow me to set off the defrost cycle any time I want to as well as having it report through the XBee the status of the defroster.  This leaves a clear opportunity for installing a temperature sensor, compressor sensor, door sensor, etc.  Over time I may well do some of these things.  I could go nuts and use the arduino to control the entire freezer; these appliances are relatively simple devices and a little arduino and some relays could take over the entire operation.  I'm not sure there's any real point to that since it works well already, but I may get bored some hot summer day.

A temperature sensor would be pretty nice though.  I could send the temp to my house controller <link> and set up a piece of code to check for the temperature getting too high.  A too-high situation could easily send me mail or light up an LED somewhere to alert me to a problem.  Or both.

Here's a chart of my freezer power usage over a 24 hour period:

The freezer is the black line.  Notice the two humps, one at 08:15 and the other at 20:15?  That's the increased power usage from the heating units (one on the evaporator and the other on the drain tube).  Now I have this power using mode scheduled for the lower rate periods.  With the new LED lights I installed in the freezer to replace the incandescent ones, this device is getting cheaper to run all the time.

Before you tell me that the wall wart and arduino probably use 5 watts continuously, remember my goal was to move the higher usage away from peak billing periods.  I'd rather have 5 watts continuous than 400 watts for thirty minutes during peak.  Peak usage is really expensive in my area.