The Minute You Turn Your Back

Last weekend I noticed an odd increase in power that shouldn't have happened.  Then, it happened again a couple of days ago.  Here's the graph:

Notice the two humps in the red graph, one around 12PM and the other at 2PM.  These shouldn't be there because all the heavy power using devices have been shut down during the afternoon peak usage period.

As I described on my Power Usage page <link>, this could easily drive my bill up by a hundred dollars or so.  Needless to say, I was concerned and started checking every appliance in the house to see if it could have come on during this period.  The length and duration looked suspiciously like the water heater assist coil could have been activated, but everything on that device checked out OK.

I scratched my head for a while and noticed that this was a recurring event during the heat of the day.  Here's a graph of the next day showing a few of the same kind of thing.

So, I went outside, looked at the meter for the demand level to see what I might have to pay come bill time and the peak level was at 1.5 kW, not the 3kW or so I expected.  This means that the humps in power usage aren't real, they're some kind of artifact of the power reading process.

Voltages checked out, things seemed ok until I flipped off the GFI that supplies the power monitor <link> and it wouldn't come back on when I tried.  A ton of troubleshooting later which included having to climb up on a ladder and disconnect the garage door opener and a partial dismantling of the mains box, I found the problem.

See, there were several problem that have been going on that I thought were unrelated.  The GFI I mentioned failed a week ago and seemed to be fine after I replaced it,  the freezer in my kitchen has had a problem with the interior lights flashing erratically when the door is open, electric tools in the garage have strangely shut off, and the garage light (on the door opener) comes on sometimes for no reason.  This phantom power usage indication was what got me off my butt and looking for the problem.

It was an arching circuit breaker in the mains panel.  These things can be easily removed and have a slide on connector to the power buss inside the panel.  Since my panel is full, I have a number of double breakers where two half size breakers can take the place of one full size.  One of these was arching where it connects to the power buss.  Here's the breaker that failed: 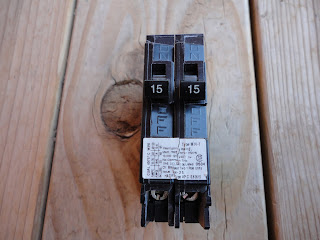 And here's a close up of the connection that was giving me the problem: 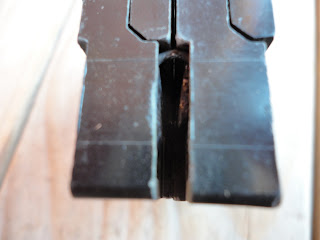 If you look closely there is charring on the spring connector in the slot.  There was charring on the post in the power panel as well. Replacing the breaker corrected the problem and all the other strange things inside the house settled right down.

OK, here's the disclaimer:  There's enough power inside the mains box to kill you, so if you're the least bit uncomfortable, don't mess with it; leave it to someone that thinks they're qualified to work on this.  Me, I took it apart without a second thought, but that's just me.

What was happening was that the connection was loosening when the heat inside the panel rose during the heat of the day.  That side of the house is in the direct afternoon desert sun and gets really hot; you can't put your hand on the panel in the heat of the day without gloves.  All the equipment is rated for this since I live in the desert, but the environment takes its toll over time, so this kind of thing can happen.

The loose connection arched, got some carbon deposits that caused it to arch some more, and created enough noise on the power lines that it drove the sensitive electronics of the power monitor nuts.  It also caused the lights to flicker in my freezer because the second switch on the breaker was hooked to the freezer in the kitchen.  My garage door and the GFI that failed are fed from the same circuit the power monitor is plugged into.  This little two circuit breaker was driving my house electronics crazy.

The really good thing about this is that the problem showed up as a bad reading on the power monitor.  This was before the breaker failed completely and shut down a critical part of my house...my freezer.  If I had been away and the thing failed, I would have lost the contents of my freezer and had a mess to clean up.  See, there's another good reason to automate and monitor my house.

So, if you have strange flickering lights, GFIs that don't work right, and garage doors that behave strangely, it may not be ghosts.
Posted by dave at 1:56 PM