My float charger that is based on ideas I stole from the Harbor City 42292 device has gone through another iteration.  I decided to actually have a circuit board made that would hold the components and allow me to mount the board properly.  Using Eagle, I drew up a board which included the charger parts and everything necessary to support the XBee.  It was fun and came back looking like this: 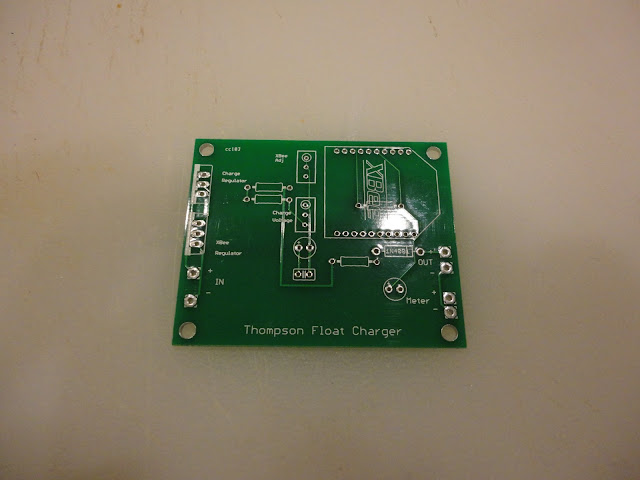 It was so cool getting my first printed circuit board design back in the mail, so I rushed right in and assembled it.  Naturally, there were a lot of problems.  I hooked the voltage divider for the analog measurement to the wrong pin on the XBee and had trouble telling it was transmitting because I didn't include  troubleshooting lights to look at.  I got Eagle back up and changed the design, and ordered another board. 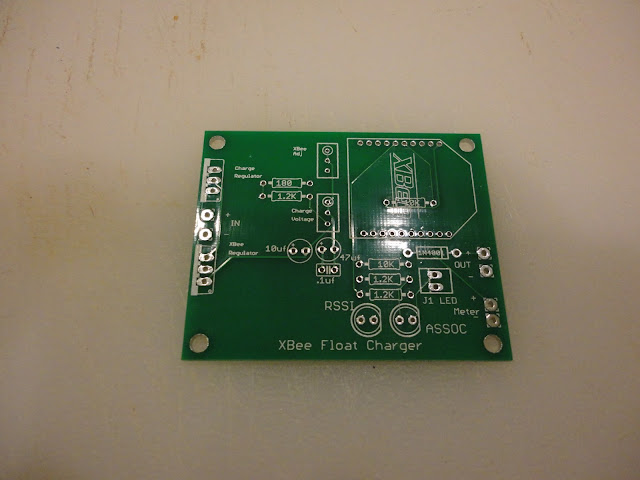 On this one I also increased the size of some of the traces and moved the voltage regulators around so I could use the heatsink I kept from the original charger.  So, I populated the board and hooked it to the lid of the box.  The entire device looks like this: 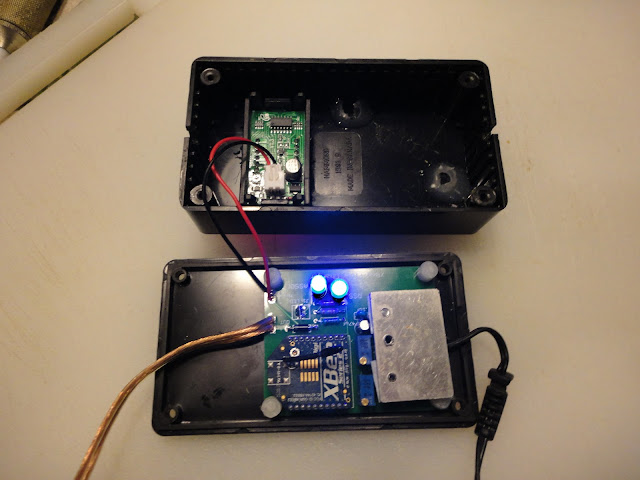 I happened to catch the leds on in the picture, but they are disconnected in a running device because they draw unnecessary power when it is actually in use.  It works real nice, and keeps the battery voltage at a constant 13.4 volts.  I've had several hand wired ones in place for months now and they are doing the job.

I'm still not done though.  I discovered a way to sense current being put out by the device.  I can put a hall sensor over a trace on the board that carries current and it will change output relative to the current flowing through the trace.  I doubt that I can tell the exact amount of current passing through the trace, but I can certainly tell if it is actually charging the battery.  This idea will take some development though and I don't know what components will be necessary for the final result, so I'll just assemble the rest of them and put them to work. I hope to get back to the hall effect device idea in a couple of months and work out the details.  The previous post on these devices is here <link>

I learned a lot creating the board, and I think I can develop boards for other ideas I have.  Things like a timer that will catch the time broadcast on my XBee network to operate lights and other devices would be great. It gets to be a real pain tediously connecting wires on a protoboard, especially when you want several identical devices.  Having an XBee network and something like this means I can finally get rid of the X10 devices that are so unreliable.  It would be so cool to completely switch over to XBee throughout the house.
Posted by dave at 6:43 PM