Apple Device: "Charging is not supported with this accessory"

I don't have a single Apple device in my house, no iPad, iPhone, iPod, iAnything.  I don't even have any apples.  However, the little wall warts I bought <link> have a bad reputation because they don't work on some iDevices.  While it's true that they don't, it really isn't their fault, it's Apple's.  This is the message: 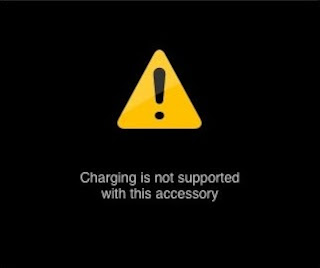 Notice that it doesn't say that the device is the wrong voltage, wrong polarity, or wrong anything else?  That's because the device just doesn't meet the Apple standards of being made by Apple specifically for a particular Apple device.  They really, really want to lock you into buying your stuff from them and them alone.

My little chargers are fine and will work with Apple stuff with a simple modification that I won't do since I don't need to charge Apple devices.  What Apple did was use the D- and D+ (the two middle pins on a standard type A usb plug) to supply specific voltages that Apple could look at to tell if the charger was one of theirs.

Well, this little trick didn't last long before the engineers that make battery extenders and chargers figured it out.  Obviously, they grabbed a real apple charger and ripped it open to see what kind of shenanigans Apple was up to.  One manufacturer Lady Ada wrote up a nice description of what was happening and how she worked around it for one of her products, the MintyBoost.  She has a nice description of how she overcame the problem and made her stuff work <link>.

This also explains over 90% of the complaints on the web about various iDevices not working with a charger.  Basically, these two voltages (D1 and D2) are tiny and can vary a lot based on contact resistance, length of cable, net draw of the device, etc.  Basically any darn thing at all.  For example some of the solutions are to turn off the iPhone, plug the cable and charger into the phone, plug the charger into the wall, turn on the phone, repeat a number of times to allow the gremlins to align correctly.  And, this occasionally works.  Another solution is to lower the screen intensity, put the phone in airplane mode, then hook up the charger. There's always someone that says you need a new cable, better charger, or hold your mouth differently.  In the case of the iPhone, there was an OS update that caused a significant number people to have charging problems.  The fix for many of these non-technical folk was to go to the Apple store and get a new device or have a new part installed that will work.  Of course there are the Apple cultist that insist that only a new Apple charger will solve the problem.

But people, electrons are electrons and it isn't you or your device when a problem like this turns up, it's Apple exercising their control over their cult.  Annoying.

Don't despair yet.  There are ways to get around this problem that actually make sense.  No, you don't need to wet a Qtip with perfume and clean the contacts, letting it air dry for an hour(this is a real suggestion), there are much more mundane solutions.  For example, this site <link> talks about a little connector that has Apple plugs on both ends and works around the problem.  However, the darn thing is too expensive (I'm not a fan of this solution, but some of you might be).  There are several other similar devices out there that solve the problem.  You can also solve the problem by building something yourself (gasp !); I know this goes against life philosophy of the myriad teenagers that talked their parents into getting this cool new gadget, but life isn't fair.

Just cut a USB charging cable that mates with the device and add a little voltage divider.  The schematic of the changes is: 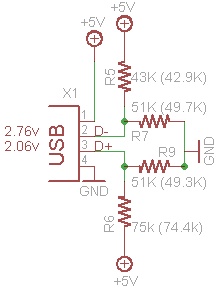 If this picture doesn't look familiar, take another look at Lady Ada's description, it was taken directly from there.  See, Apple uses the voltage divider to set specific voltages on D+ and D- to identify their devices.  Other manufacturers don't do this kind of thing unless they're trying to meet the USB charging standards, and for a low price device it isn't worth the effort or cost. Just another effort of Apple to wrangle you into their pen.

So, you ask, "What do you care, you don't own an Apple device?"  I don't, but my less fortunate friends, neighbors, and relatives do.  They get really annoyed when their devices won't work on one of my chargers when they come to visit, and they hate it when a charger stops working and gives them this silly, non descriptive message.  Also, I found zero, nada, explanations of what was going on to help people with this problem.  That annoyed me more than anything else, so I decided to post it here and a couple of other places, hoping that poor souls that are eating up Google cpu cycles could, at least, understand the problem better.

Soak a Qtip in perfume and clean the contacts?  Really?
Posted by dave at 2:35 PM